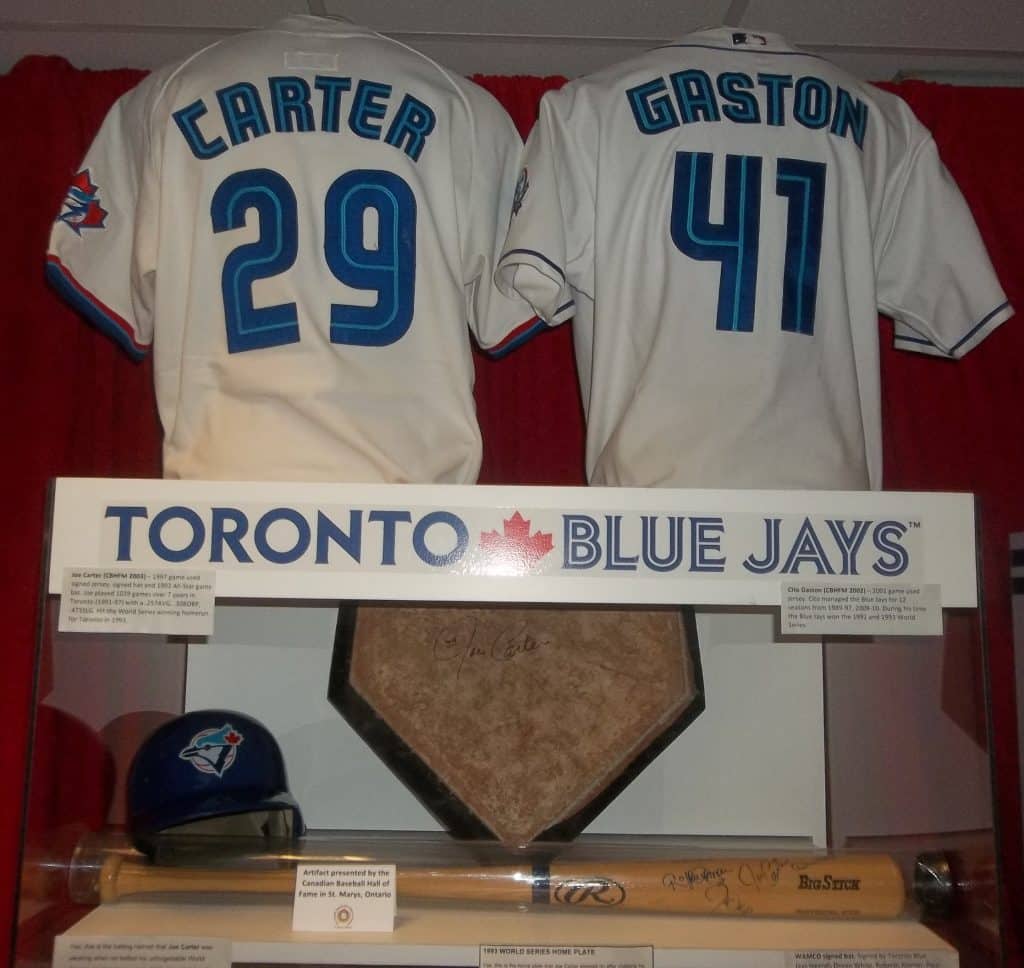 What a different off-season it has been for CBHFM!  In November, a hard-working team of volunteers packed up the collection for storage pending the start of construction on the Museum extension and renovation.  Special thanks go out to Wayne and Sherri Barber and St Marys DCVI for providing storage for some of our artifacts.

Despite variable winter weather, the new addition has gone up steadily over the past few months.  At this point, the exterior walls are up, interior framing done and the floor is in. Once the expansion is complete, renovations to the inside of the building will start. In progress photos may be found under the HOF Expansion tab on this site.

Director of Operations Scott Crawford has been busy with off-site displays in addition to his regular duties, notably a large set-up at the Rogers Centre on January 20 at the Blue Jays WinterFest.  And just a couple of weeks ago, he brought some real gems from the collection to the 100th Season Celebration Dinner of the Intercounty Baseball League in Kitchener, Ontario. The gala was well-attended with such guests as World Series winner Rob Butler, Paul Spoljaric and other IBL luminaries, as well as a few CBHFM members, notably Bob Elliott who participated in a panel discussion.

In other news, we welcomed Jeremy Diamond, the Executive Director of The Vimy Foundation, to the Board of Directors in June 2017.

2018 inductees Lloyd Moseby, Pedro Martinez and Bill Humber are excited to be in St. Marys for induction weekend June 14-17.  They will be joined by Hall of Famer Fergie Jenkins, Steve Rogers, fan-favourite Kelly Gruber and former players such as Paul Spoljaric, Larry Landreth and others, so mark your calendars. June 14 is The Opening Pitch VIP event in Toronto, June 15 is the 22nd Annual Celebrity Golf Classic & Banquet, June 16 is the Induction Ceremony.

Last weekend,  Bill Humber’s Baseball Spring Training for Fans class celebrated his induction into CBHFM with a giant baseball cake, a photo of which was posted to our Twitter account. This course has now run at Seneca College for an astonishing 40 years! Maybe next year will see some live-streaming to the rest of the country. We can only hope! Focus on our volunteers:  Like most non-profits, CBHFM would not be able to carry on without a dedicated bunch of volunteers, most from St Marys and area.  Our spotlight this time is on baseball writer and blogger Kevin Glew. Kevin’s behind many of our announcements and press releases and has given us countless hours of his journalistic time over more than 20 years.  If you haven’t checked out his Cooperstowners in Canada blog, you should. Find it at: https://cooperstownersincanada.com/