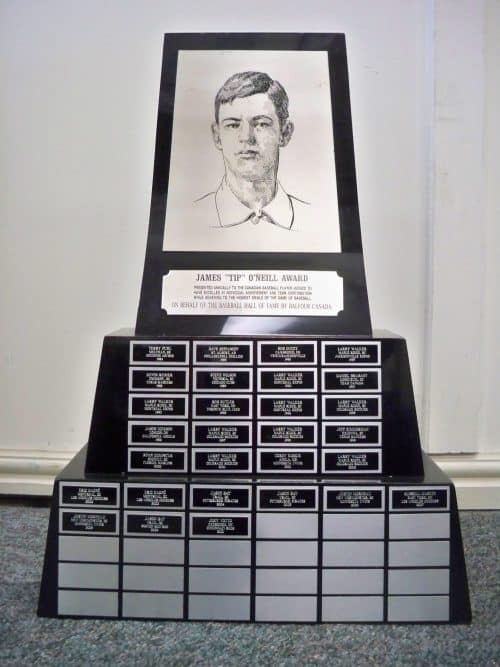 And while these Canadians were starring at the big league level, several others were shining in the minor-pro and international ranks. Andrew Albers (North Battleford, Sask.), Jeff Francis (North Delta, B.C.), Pete Orr (Newmarket, Ont.), Tyler O’Neill (Maple Ridge, B.C.), Phillippe Aumont (Gatineau, Que.) and Jamie Romak (London, Ont.) all performed well in the minor-pro ranks and Albers, Francis, Orr, O’Neill and Aumont were also part of the Canadian team that won gold at the Pan Am Games. Meanwhile, Nicole Luchanski (Edmonton, Alta.) batted .533 for the women’s squad at the same tournament to help propel them to a silver medal.

That’s the dilemma the Canadian Baseball Hall of Fame faces, and they would like your input to determine Canada’s top performer as they prepare to chose their 2015 James “Tip” O’Neill Award winner. This honour is given out annually to the player judged to have excelled in individual achievement and team contribution while adhering to baseball’s highest ideals.

The Hall encourages you to vote for the players you think are worthy of this award by midnight E.T. on Wednesday, November 25. You can e-mail your top three choices (please be clear on your first, second and third selections) to baseball@baseballhalloffame.ca or you can vote on the Hall’s website at www.baseballhalloffame.ca.

Le vote du public est l'un of the criteria the Hall will take into account when selecting the winner, which will be announced on December 4. John Axford (Port Dover, ON)
Co-winner of the 2011 Tip O’Neill Award, Axford returned to the closer’s role in 2015 and recorded 25 saves for the Colorado Rockies. This moved him past Canadian Baseball Hall of Famer John Hiller (Toronto, Ont.) into second-place on the all-time Canadian saves list. The right-handed Axford allowed just one earned run in his first 15 games this season and finished with 62 strikeouts in 55-2/3 innings. Adam Loewen (Surrey, B.C.)
When this 6-foot-6 left-hander took the mound for the Philadelphia Phillies on August 10, he became the first big leaguer to debut as a pitcher, then become a full-time positional player and then return as a pitcher since Johnny Lindell completed this feat in 1953. The 2002 first-rounder pitched parts of three seasons with the Baltimore Orioles from 2006 to 2008 before an elbow injury seemingly ended his career on the mound. The Canuck southpaw decided to make a comeback as a positional player and he signed a minor league deal with the Blue Jays and eventually played 14 games as an outfielder with the big league club in 2011. After two minor league seasons in the Mets and Jays organizations as an outfielder, he signed with the Phillies as a pitcher in 2014 and he returned to big leagues this season to strike out 22 batters in 19-1/3 innings in 20 appearances. Nicole Luchanski (Edmonton, Alta.)
This talented 25-year-old played second base and batted .533 (second best in the tournament) for the Canadian women’s team that captured the silver medal at the Pan Am Games in Toronto this summer. Luchanski’s .800 slugging percentage (first), six RBI (second) and four runs (ninth) also ranked amongst the tournament leaders.

Russell Martin (Montreal, Que.)
After signing a five-year contract with the Blue Jays prior to the 2015 season, this hard-nosed catcher proceeded to set new career-highs in home runs (23) (which broke his own mark for most home runs (21) by a Canadian catcher in a season) and RBI (77), while his .458 slugging percentage was his highest since 2007. A leader behind the plate and in the clubhouse, Martin also threw out more baserunners than any other American League (AL) catcher (32) and had the best caught-stealing percentage (44.4%) of any AL backstop. For his efforts, he was selected to his fourth all-star game and was a Gold Glove finalist. During the season, Martin also passed Canadian Baseball Hall of Famer George Gibson for most major league games (1,213) played by a Canadian catcher. Also, while suiting up for the Blue Jays in the post-season, Martin established a new mark for most career postseason at bats (162) by a Canadian, surpassing Tip O’Neill himself. Justin Morneau (New Westminster, B.C.)
After capturing the National League batting title in 2014, this three-time Tip O’Neill Award winner was limited to 49 games with the Rockies in 2015 by a neck injury and recurring concussion symptoms. In limited action, Morneau batted .310 and posted a .363 on-base percentage. He finished the season on a strong note, batting .338 in 18 games in September. Mariners organization. In 106 games for the High-A Bakersfield Blaze of the California League, O’Neill walloped a league-leading 32 home runs, posted a .558 slugging percentage and swiped 16 bases. His performance earned him the Mariners’ Minor League Player of the Year award from the Seattle Times. O’Neill also belted three home runs in eight games for Canada’s gold medal-winning squad at the Pan Am Games. for the Milwaukee Brewers’ Triple-A Colorado Sky Sox. His daring dash for home plate in the bottom of the 10th inning for Canada in the gold medal contest versus the United States at the Pan Am Games accounted for the winning run and will go down as one of the most unforgettable moments in Canadian baseball history. In all, in that tournament, Orr scored six runs, hit .353 and posted a .395 on-base percentage.

Dalton Pompey (Mississauga, Ont.)
After starting the season with the Blue Jays, Pompey was sent to the Double-A New Hampshire Fisher Cats, where he hit .351 and socked six home runs in 31 games before being promoted to Triple-A Buffalo. He continued his hot hitting in Buffalo and was recalled by the Blue Jays in September and served as a key pinch runner down the stretch. Pompey was employed in that role again in the postseason and he stole four bases to set an all-time playoff record for Canadians.

Jamie Romak (London, ON)
Signed by the Arizona Diamondbacks in the off-season, Romak socked 27 home runs and registered a career-best 100 RBI for the Triple-A Reno Aces in 2015. For his efforts, he was selected to be a starter in the Pacific Coast League All-Star game and was named the DH on the league’s postseason All-PCL Team. His stellar Triple-A performance earned him his second big league call-up in September. He hit .333 in 12 games with the D-Backs.

Joey Votto (Etobicoke, ON)
Limited to 62 games in 2014, Votto rebounded to enjoy one of his finest big league seasons. The Cincinnati Reds first baseman led the National League in times on base (319) and walks (143), finished second in on-base percentage (.459), third in on-base plus slugging percentage (1.000) and fourth in slugging percentage (.541). His 143 walks topped the major leagues and set a single-season Canadian record, as well as a Reds’ franchise record. Votto also established new Reds’ records by reaching base safely 319 times and by getting on base at least twice in a game 107 times. He also tied Pete Rose’s Reds’ mark by reaching base safely in 48 consecutive games. Votto’s 7.4 WAR ranked fifth in the majors and his 29 home runs tied the second highest single-season total of his career. For his efforts, he has been named a finalist for the National League MVP Award and the Players Choice Comeback Player of the Year award.