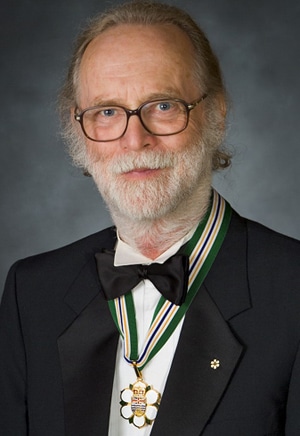 W.P. Kinsella, the 2011 recipient of the Canadian Baseball Hall of Fame’s Jack Graney Award, has passed away at the age of 81.

The beloved Canadian author, whose baseball novel, Shoeless Joe, inspired the Oscar-nominated movie Field of Dreams, died on Friday at his home in Hope, B.C.

“I was saddened to learn of the passing of W.P. Kinsella. His work has touched the lives of thousands of baseball fans across Canada and around the world,” said Scott Crawford, the Canadian Baseball Hall of Fame’s director of operations. “His most famous book was the classic Shoeless Joe, which inspired one of my favourite movies, Field of Dreams, but he also wrote another book called Magic Time, which was a fitting title because that’s what it felt like when I’d sit down and read his work. It was pure magic.”

Born on May 25, 1935 in Edmonton, Alta., William Patrick Kinsella was home-schooled by his mother. His father was a plastering contractor who had played minor league baseball in Florida, California and in the Edmonton area. Kinsella fell in love with the game while he was playing with friends on sandlots and schoolyards in Edmonton as a child, but he often confided in interviews that he was never a skilled player himself. He was, however, a skilled student. He could read and write by the age of five and when he was 14, he won a YMCA contest for a short story called “Diamond Doom.”

Though he eventually penned more than two dozen novels, it wasn’t until Shoeless Joe was published in 1982 that his work would find a large audience. The book has since sold tens of thousands of copies and is still in demand today, thanks largely the enduring popularity of the heartwarming film it inspired. Released in 1989, Field of Dreams proceeded to gross more than $85 million worldwide and it’s still regularly ranked as the greatest baseball movie of all-time.

“I still remember sitting in a local movie house in White Rock, B.C. watching the movie when it came out, and hearing the whole place cry when Ray (the main character) asked his father at the end if they could have a game of catch,” recalled Kinsella prior to receiving the 2011 Jack Graney Award for his contributions to baseball in Canada.

For his literary efforts, Kinsella was made an Officer of the Order of Canada in 1993 and was awarded the Order of British Columbia in 2005.

He is survived by two daughters and several grandchildren. At Kinsella’s request, there will be no memorial service.