Early baseball games were played using homemade bats, and many of these were very unique. Players would experiment with different lengths and shapes to find out what would work best for them. Generally, bats were larger and heavier than today’s bats. Some were flat, and some even were curved! Because of the various shapes and sizes in bats used, rules were established in the late 1800s stating that bats could be no larger than 2.5 inches in diameter, and no longer than 42 inches in length. This is the same maximum length as is allowed in Major League Baseball today, and a similar diameter (MLB rules now limit the diameter to 2.61 inches). By the end of the nineteenth century, more rules governing bat shape were introduced, including prohibiting bats with flat ends. 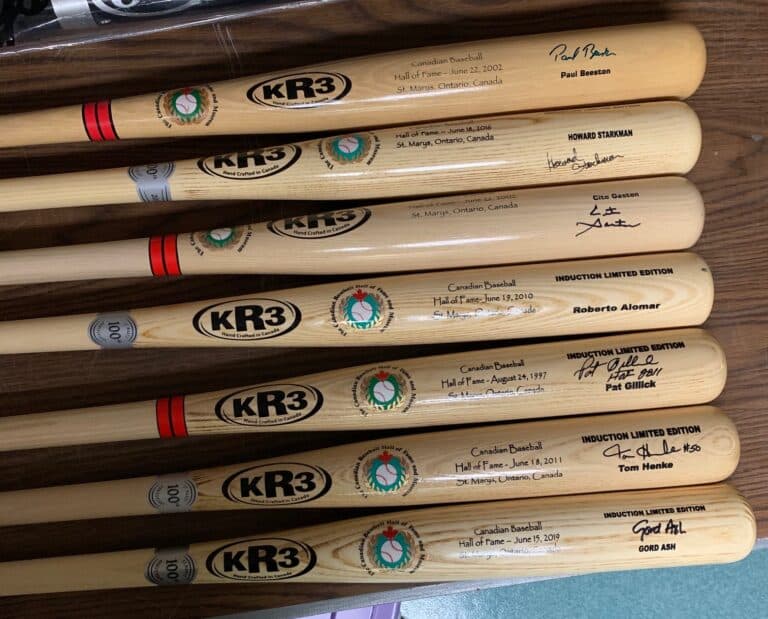 There are several Canadian brands of bats used in Major League Baseball today. The first Canadian bat to be used in the MLB was the Cooper Bat. In September 1985, Tony Fernandez became the first MLB player to use a Cooper Bat, sneaking one into a game. However Major League Baseball didn’t approve its use, so Fernandez had to return to the dugout for a new bat. The following March, Cooper Bats were accepted by the Major League Baseball Playing Rules Committee for use in the 1986 season. On April 11, 1986, Buck Martinez had his first hit of the season with a Cooper Bat, marking the first ever MLB hit off a Canadian-made baseball bat. Cooper Bats became popular with MLB players in the years following this. The Montreal Expos’ Tim Raines won the 1986 National League Batting Championship using a Cooper Bat, and Paul Molitor used a Cooper bat in his 39 game hit streak in 1987.

Another Canadian bat, the SAM BAT, was introduced to Major League Baseball in 1997, when the Toronto Blue Jays’ Joe Carter snuck one into a game. He hit a home run off this bat, and the bat was officially approved for use in Major League Baseball the following season. The SAM BAT was created using Canadian maple trees, as an alternative to the more common ash bats. Ash bats had a tendency to splinter and break, while maple is a harder and denser wood and could withstand more hits. Joe Carter introduced Barry Bonds to SAM BAT and Bonds became a loyal customer, hitting a single season record 73 home runs with a SAM BAT in 2001. With the success of the SAM BAT, other companies began to develop their own maple bats, and maple bats become more popular with professional players, overtaking ash bats. By 2017, the majority of bats sold to professional baseball leagues were made of maple instead of ash.

Please enjoy this selection of baseball bats in the Canadian Baseball Hall of Fame and Museum’s permanent collection. These bats, some Canadian-made, were used by former Toronto Blue Jays and Montreal Expos players.