A Story of Baseball’s Integration​​

One of the more recent baseball movies which has become an instant classic is 42. This exhibit section explores the events prior to where the movie 42 begins, as well as Jackie Robinson’s legacy today.

42, released in 2013, stars the late Chadwick Boseman as baseball player Jackie Robinson, the first Black individual to play in a modern major-league baseball team. The movie focuses on Robinson’s early career in the majors, and the difficulties he faced from teammates, opponents, and fans alike. The movie concludes after the pivotal moment where Robinson’s home run secures the Brooklyn Dodgers their spot in the 1947 World Series.

The movie 42 is set in 1946, where baseball looks unrecognizably different than it did in the previous century. Despite the impression given by the racial tensions portrayed in 42, baseball was not always segregated. In the late 19th century, there were no official rules barring Black players from the game. Some of the early professional baseball associations allowed Black players while others did not. Inclusion, however, did not mean acceptance. Despite there being an estimated 60 Black players in 1885, they faced racial slurs from crowds, shunning from teammates, and even targeted acts of violence from opposing teams. It wasn’t until 1887 that specific steps started being taken to exclude Black players, and many credit Adrian “Cap” Anson of the Chicago White Stockings with spearheading this movement against Black players. By 1900, the segregation was complete, leaving players of colour with no choice but to form their own leagues.

Between unwritten “gentleman’s” agreements not to play against teams with Black players, and white-led teams no longer signing players of colour, forming “Negro Leagues” was the only option for those who wanted to play. The first professional Black baseball team was the Cuban Giants, made up of waiters from the Argyle Hotel in Babylon, New York. Team members included George Parego, Andrew Randolph, Frank Harris, Manager John F. Lang, and more. Other notable Negro Baseball League teams include: The Kansas City Monarchs, The Chicago American Giants, and The Detroit Stars. The first Negro World Series was held in 1924, between the Kansas City Monarchs from the Negro National League and the Hilldale Athletic Club from the Eastern Colored League.

Jackie Robinson and the Montreal Royals

Although the movie 42 focuses more on Robinson’s times with the Brooklyn Dodgers, the significance of his beginnings with the Montreal Royals, the AAA team associated with the Brooklyn Dodgers, is not to be overlooked. When he earned his spot with the Montreal Royals, the team became the first integrated modern baseball team. Although Robinson only played for the Montreal Royals for one season, it was a significant moment in sports history which signaled the end of segregation in baseball.  Jackie Robinson is quoted as saying “I owe more to Canadians than they’ll ever know. In my baseball career they were the first to make me feel my natural self.”

Robinson’s Career with
the Brooklyn Dodgers

The main events of 42 conclude at the end of Robinson’s first season with the Brooklyn Dodgers in 1947. So what was the rest of Robinson’s pro baseball career like? Robinson continued to play for the Brooklyn Dodgers until the end of his baseball career in 1956, after the Dodgers won the National League Championship. During that time, Robinson won 11 awards including Rookie of the Year (1947), National League Batting Champion (1949), and multiple All-Star awards. Jackie Robinson was elected to the National Baseball Hall of Fame in Cooperstown in 1962 and the Canadian Baseball Hall of Fame in 1991. Post baseball, Robinson worked as a sports announcer for ABC, and participated as a commentator in telecasts for the Montreal Expos. Robinson also publicly advocated for desegregation in the US, giving a powerful speech at the National Association for the Advancement of Colored People (NAACP).

Jackie Robinson’s contribution to the desegregation of baseball and the combating of racism across North America will never be forgotten. His legacy has been and continues to be honoured in many ways. As of June 4th, 1972, The Brooklyn Dodgers permanently retired Robinson’s uniform number 42 (hence the title of the movie 42). Following this, all other major league teams retired the number 42 in honour of Robinson, making his uniform number the first to be retired by the entire sport.

In 2004, Jackie Robinson Day was established by Major League Baseball to commemorate Robinson’s career and public service. Jackie Robinson Day is held annually on April 15th, the same day that Jackie Robinson played his first game as a member of the Brooklyn Dodgers. Each year special equipment and jerseys are made, and a ceremonial first pitch is thrown before games begin across multiple baseball stadiums in North America. Below are some Jackie Robinson Day items made by the Toronto Blue Jays and the Montreal Expos. 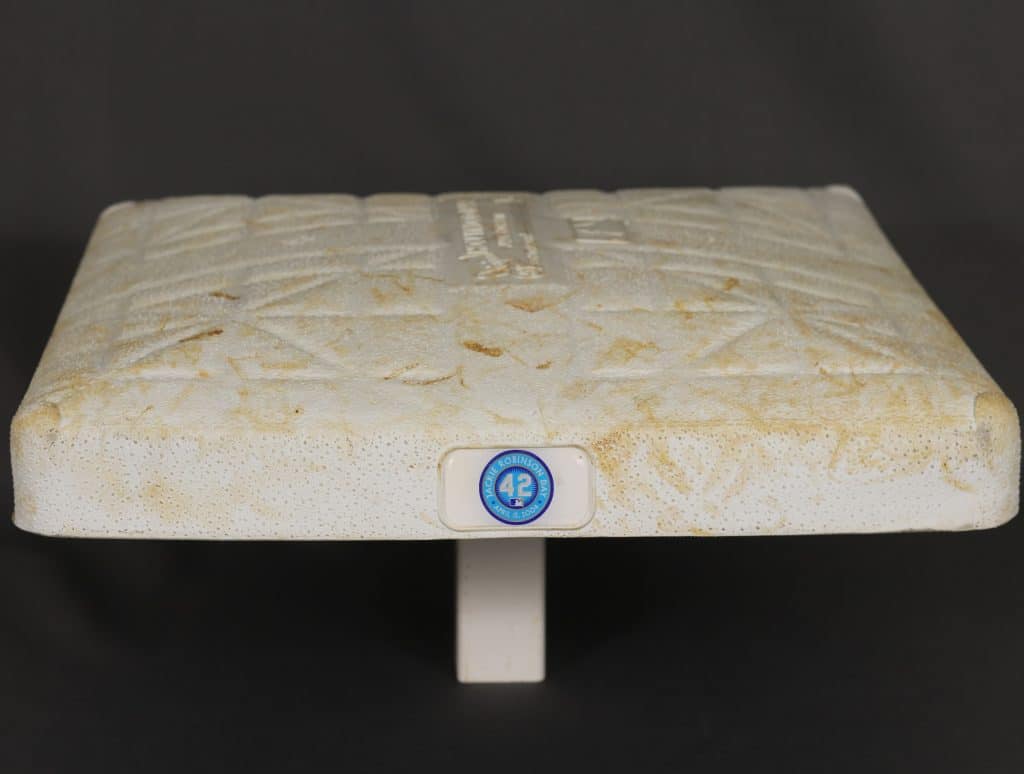 Next April 15th make sure to sit down and watch 42 to remember how over 60 years of racial segregation was ended by one man’s talent and determination.