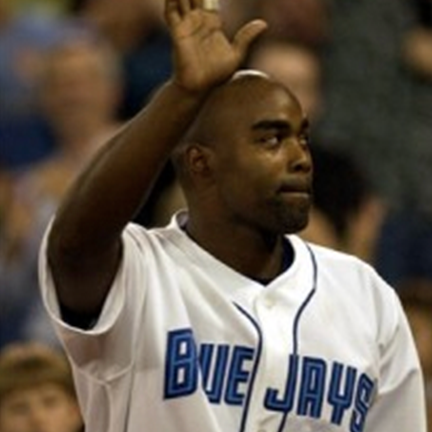 Delgado became a regular with the Blue Jays in 1996 and would star with the club for the next nine seasons. During that stretch, he had eight consecutive, 30-home run campaigns, was selected to two all-star games (2000, 2003), won three Silver Slugger Awards (1999, 2000, 2003), a Hank Aaron Award (2000) and was named The Sporting News Major League Player of the Year (2000). He also finished second to Alex Rodriguez in the American League MVP voting in 2003. Not only did Delgado lead the Blue Jays in numerous offensive categories, he also topped the American League in doubles (57) and total bases (378) in 2000 and in RBI (145) and on-base plus slugging percentage (1.019) in 2003. On September 25th of that same year, he also became the first Blue Jay – and 15th player in major league history – to belt four home runs in a game.

After leaving the Jays following the 2004 season, Delgado extended his string of consecutive 30-home run seasons to 10 with the Florida Marlins and New York Mets. He finished his career with 473 home runs (31st all-time) and 1,512 RBI (52nd all-time) in 17 big league seasons.

Off the field, Delgado was very active in charitable endeavors. In 2001, he formed a non-profit organization called “Extra Bases” to assist youth and underfunded services in Puerto Rico. While in Toronto, he supported several charities, including the Special Olympics and Easter Seals. In 2006, he was honoured with Major League Baseball’s Roberto Clemente Award, which is given out annually to the player who best exemplifies humanitarianism and sportsmanship.

“I’m very honoured and humbled to be selected into the Canadian Baseball Hall of Fame,” said Delgado. “This is unbelievable news! I always say that you do not play the game for the awards, but if at the end of the day, you get that recognition from your fans and peers, it means a lot. And this is extra special to me because of the relationship that I have with the Toronto Blue Jays and their fans all across Canada.”