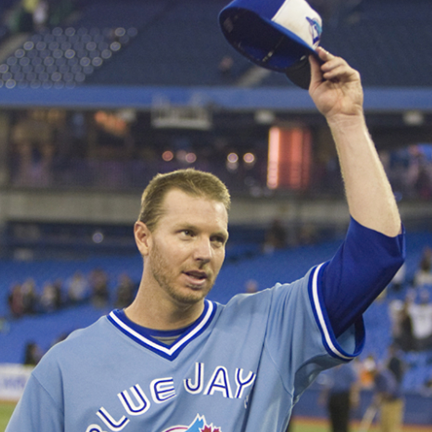 Born in 1977 in Denver, Colo., Halladay was the Blue Jays’ first-round pick (17 overall) in the 1995 major league amateur draft. On September 27, 1998, in his second big league start, he carried a no-hitter into the bottom of the ninth and had two outs when Detroit Tigers pinch-hitter Bobby Higginson homered. Halladay finished the contest with a one-hitter in the Blue Jays’ 2-1 win.

After being dealt to the Philadelphia Phillies in December 2009, Halladay continued his dominance in the National League, recording 21 wins and leading the circuit in innings pitched (250-2/3), complete games (9) and WAR (8.3) in 2010 to earn his second Cy Young Award. On May 29 of that season, he tossed a 20 perfect game in major league history and just over four months later, on October 6, he became the first National League pitcher to throw a no-hitter in the playoffs when he blanked the Cincinnati Reds in the opening game of the National League Division Series. For an encore with the Phillies, Halladay posted a 2.35 ERA and topped the National League in complete games (8) and WAR (8.9) and finished second in Cy Young Award voting in 2011.

In total, in his 16-year major league career, Halladay was selected to eight All-Star games, collected 203 wins and posted a .659 winning percentage, which ranks 19 all-time. Roy passed away November 7, 2017.