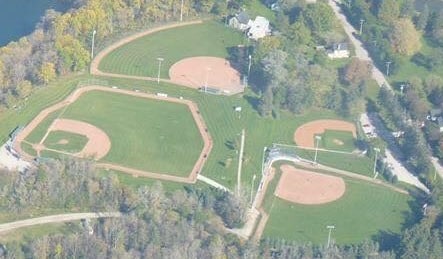 Museum update:  We’re carrying on with the organization of items in preparation for our new exhibits, working with BaAM to collect the stories we want to showcase and match them with the correct artifacts.  Scott and Ken Dodd have finished up with some 450 bats in the collection, including some real treasures! Last weekend saw the last of the games played on our diamonds.  Mother Nature ended the Ontario Nationals’ 16u/18u fall ball world series with hail!  Speaking of the diamonds, Walter Pearce took an aerial photo of the site, which gave a good look at the expanded Museum structure. We’re already receiving booking inquiries for 2019, so the summer already looks busier than it was this year.

CBHFM’s Holiday Silent Auction starts November 14. New this year…..all bidding will be done directly online. Stay tuned for details as over 50 items will be available. Other exciting news to watch for in late November and early December are announcements of the annual Jack Graney and Tip O’Neill award winners.

The deadline for nominations for induction into our Hall of Fame is December 1 and the process is open to anyone. The nomination criteria may be found on our website, here. If you think someone is worthy of induction and require more information, please contact the office ASAP by calling 519-284-1838 or emailing baseball@baseballhalloffame.ca.

It was quite a week for us and Canadian baseball history in general:  Rob Thompson visited with Scott for a look at the Museum reno in progress and to chat about his first year as bench coach for the Phillies. Rob spoke very highly of Phillies starting pitcher/Canadian Nick Pivetta.

CBHFM honoree Jack Graney made it onto the ballot for Cooperstown’s 2019 Ford C. Frick Award.

Roy Halladay’s son Braden pitched 1 1/3 hitless, scoreless innings for the Florida Burn Platinum as they beat Canes National 2-0 in final of an 88-team, 20th annual Perfect Game WWBA World Championship in Jupiter, Florida. (Thanks to Bob Elliott for this.)

Also this week, Jim Baba, former head of Baseball Canada, was inducted into the Moose Jaw and District Sports Hall of Fame, a well-deserved honour, while Tom Henke was inducted into the Ontario Sports Hall of Fame, established by our founder Bruce Prentice, and Joey Votto received the Ontario Hall’s Syl Apps Award for Ontario Athlete of the Year 2017. Last but not least, Joe Carter hit what MLB has called ‘one of the greatest World Series home runs ever’ to lead the Jays to their second World Series title on October 23, 1993.

Hamilton, Ontario’s Frank O’Rourke spent more than 70 years around the diamond as a player, manager and scout. He was the youngest player in the National League when he debuted as a 17-year-old shortstop with the Boston Braves on June 12, 1912. After 61 games with the Beantown squad, he returned to the minors for four seasons. He would resurface in the big leagues as a third baseman with the Brooklyn Robins in 1917.

After major league stints with the Washington Senators and Boston Red Sox, and two standout seasons with the International League’s Toronto Maple Leafs, O’Rourke starred with the Detroit Tigers. His finest big league season was in 1925, when he hit .293 and racked up 141 hits – including 40 doubles (fifth best in the American League). He suited up for his final five major league seasons with the St. Louis Browns, where he would knock in 62 runs in both 1928 and 1929.  Subsequently, he spent more than 30 years as a scout for the Yankees.

A final reminder: We’ll be at the 3rd annual Canadian Baseball History Conference on Saturday & Sunday, November 3rd and 4th at The Old Courthouse in London, Ontario with artifacts, merchandise and books.  Highlights of the conference include a recreation of the historical Beachville game in 1838 and a tour of Labatt Park, the oldest continually operating ball field in North America. Cost is $70. For further details, please click here.

Top of the Tenth is going to hunker down to watch the rest of the World Series now, with occasional updates throughout the winter.  As always, the Canadian Baseball Hall of Fame thanks its donors, sponsors and volunteers for all they do for us. Next year should be spectacular!!