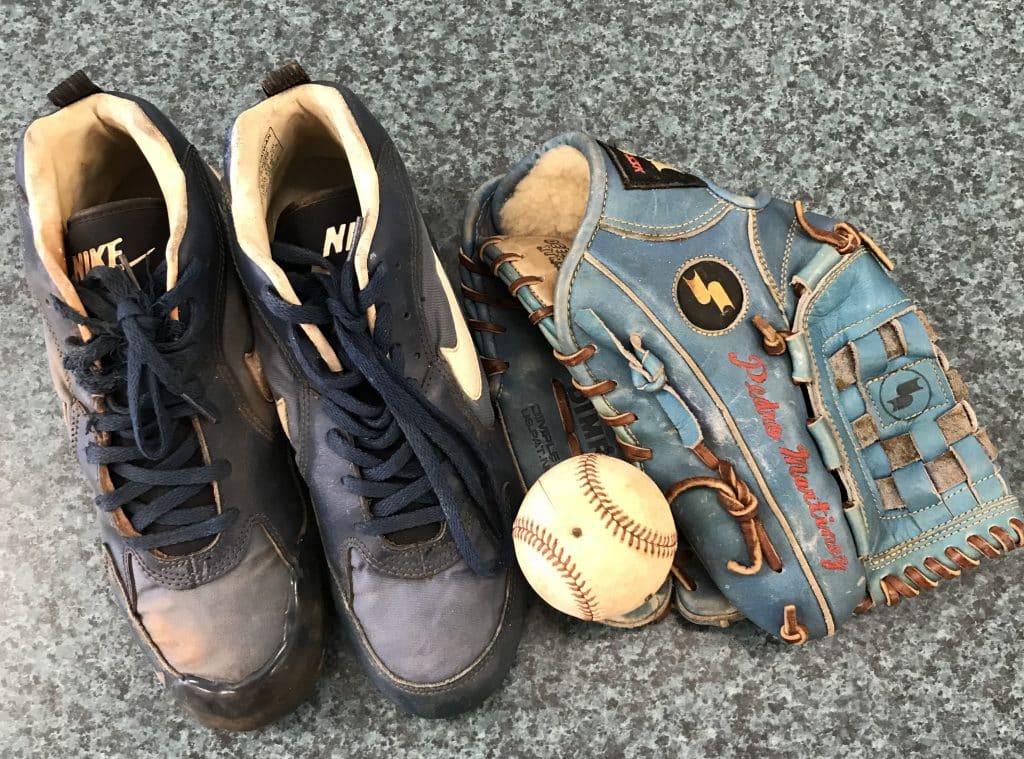 Museum update:  The outside of the building is looking good and we’ve applied to Dowler-Karn for some grant money to assist with the landscaping.  Thanks to our great supporters, we’ve reached the minimum number of sponsors required to be eligible for funding but you can add your name to the list by clicking here.  The deadline is midnight tonight (August 17, 2018).

In other news, Scott was a guest on the recent Front Porch Show held here in St. Marys and was interviewed by host John Stevens about the Hall of Fame. Topics included the new construction, the fields and plans for the future.

At the office, we continue to work on our books and paper collections, while at the fields we hosted the WOBA mosquito championship this past weekend.  Next up is the Huron-Perth Midget girls fastball year end tournament this weekend. New artifacts:  As noted on our social media, Pedro Martinez donated his game used glove, and spikes from his Montreal Expos days for our collection when we met with him in Cooperstown.

Speaking of artifacts, we provided several items from our collection to the Toronto Blue Jays for their 1992-93 World Series 25th anniversary reunion last weekend,  including the home plate that Joe Carter stepped on to win the 1993 World Series and Paul Molitor’s 1993 World Series MVP trophy. Prominent during the Jays glory days was Toronto artist Les Tait, who produced limited edition prints of the players and Skydome.  We have several of these numbered prints, signed by the artist and players such as Kelly Gruber and Dave Stieb, in our holdings. This one of Skydome hangs in our business office in downtown St Marys.

Looking ahead:  We’ll have an eye on the Canadian women’s team during the 2018

Women’s Baseball World Cup, taking place from August 17 to 26 in Viera, FL.  Canada’s first game is on Wednesday, April 22 at 2 p.m. against Hong Kong.  Our women won a silver medal in the 2016 tournament and are ranked #2 worldwide behind Japan.

And we’re looking forward to the Ottawa Champions Montreal Expos Day on Labour Day, Monday, September 3.  At age 72, Bill “Spaceman” Lee will be starting pitcher for the Ottawa Champions. The Montreal Expos will be represented by Lee, Oil Can Boyd, Dave Cash, Rondell White, Cliff Floyd and more. There will be autograph sessions and silent auctions, with a share of ticket proceeds donated to the Children’s Hospital of Eastern Ontario and the Montreal Children’s Hospital. Tickets and VIP packages are available here.

Worth repeating: Blue Jays rookie Ryan Borucki said this regarding the support he’s getting from Canadian fans:  “You don’t really realize how passionate the country of Canada is about baseball because you hear about hockey.  When I was drafted by the Jays, I didn’t know what to expect. It’s just so cool to have a whole country behind us.”

Sad anniversary:  On August 17, 1920, Cleveland shortstop Ray Chapman died after being hit by a Carl Mays pitch the day before, the only fatality in recorded MLB history. Our Hall of Famer Jack Graney was his teammate.