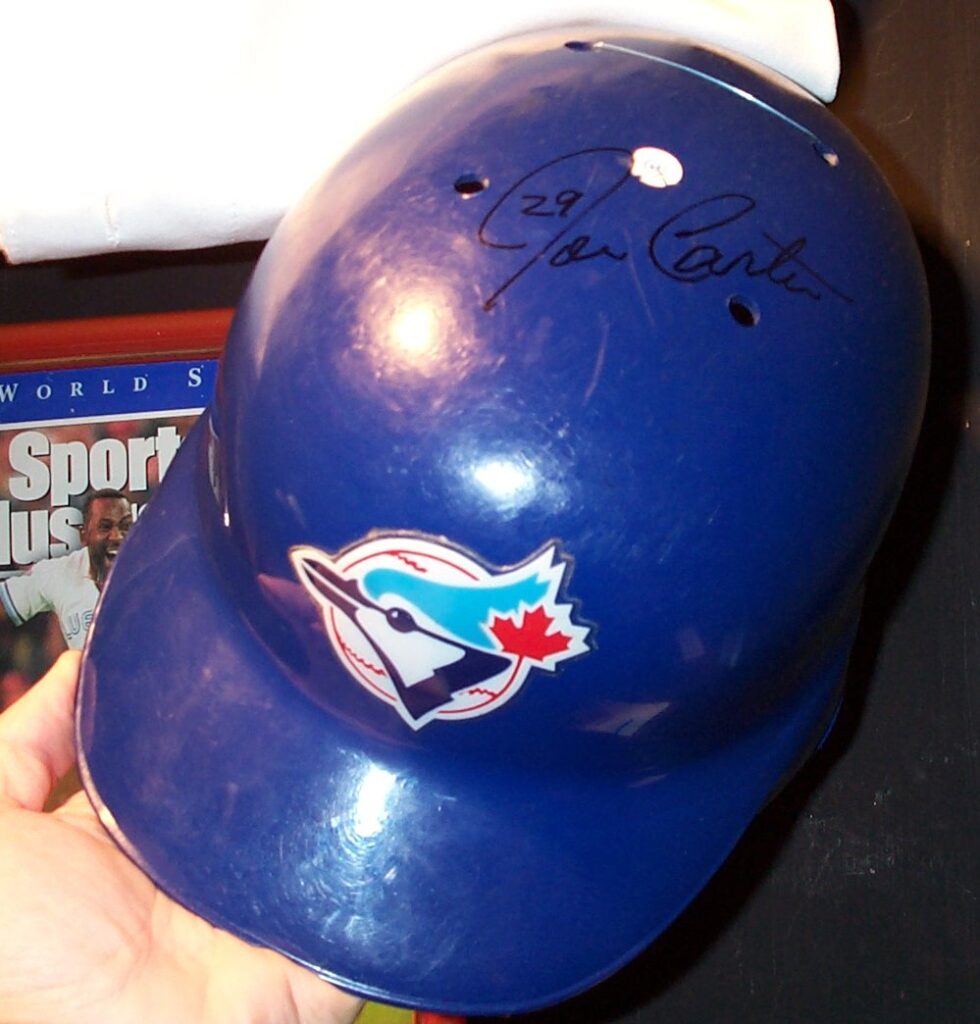 Museum update: BaAM’s design work is coming along nicely and we are bat-proofing (the flying type) the old part of the museum to further protect the artifacts.

Scott continues to sort and organize items in the collection, assisted by volunteers Ken Dodd, who’s helping with the bats (the baseball kind) and Andrew North, who is sorting the 1000s of books and magazines. Scott spoke with the K40 club in Stratford last week.

On the diamonds, the Ontario Nationals round out the season with games running until the 21st, assuming the weather cooperates. From the collection:  With the World Series around the corner, we’re featuring related artifacts from our collection.  From the Blue Jays we have, Cito Gaston’s rings from 1992 and 1993, bronzed World Series baseballs, framed tickets, the home plate from Joe Carter’s winning home run, the helmet he was wearing and an autographed jersey, Paul Molitor’s 1993 World Series MVP trophy and 1993 jersey, Mike Timlin’s 1992 jersey, and a bat signed by WAMCO (White, Alomar, Molitor, Carter, Olerud).

The Jays championship displays have always been popular with visitors to the museum and we expect nothing less in the remodelled facility. In this year’s post-season, we’ve enjoyed watching ex-Blue Jays Josh Donaldson, David Price, Edwin Encarnacion, Melky Cabrera and Yan Gomes, as well as 2018 Inductee Pedro Martinez’s commentaries on TV.   Both the Dodgers and Braves have Canadian General Managers. LA’s Farhan Zaidi was born in Sudbury, ON, while Atlanta’s Alex Anthopoulos hails from Montreal. 2012 Hall of Famer Doug Melvin (Chatham, ON) is currently the Senior Advisor for Baseball Operations for the Milwaukee Brewers and Toronto-born Gord Ash is the Vice President of Baseball Projects. Tip O’Neill winner John Axford (Port Dover, ON) pitched 5 games for the Dodgers this year, but is not on the post-season roster. London-based baseball historian Chip Martin makes a great argument for the original London Tecumsehs as the first world champions of baseball, when they defeated the Pittsburgh Allegheny 5-2 to win the International Association pennant in 1877 .  We are lucky to have a beautiful china pitcher, made in England, that commemorates their victory.  It is probably the oldest item in the collection.

Speaking of London, the downtown branch of the London Public Library is hosting a display of selected items from the Centre for Canadian Baseball Research.  Located on the 3rd floor outside the London Room, the display features materials available in the Centre’s research library, among them a handful of 19th-century guides, one of the earliest histories of the game from 1902, and a set of the first baseball tobacco cards from 1887. Selected books highlight aspects of Canada’s baseball past, from histories of now-defunct leagues to the story of baseball in Toronto before the Blue Jays. The display will be open to the public throughout the month of October, leading up to the Centre’s annual Canadian Baseball History Conference which takes place this year on November 3rd and 4th. We were pleased to learn that Historica Canada is set to film a national public service Heritage Minute featuring 2003 CBHFM Inductees the Vancouver Asahi.  The Georgia Straight reports that the production is shooting this week, with locations in Vancouver and at the site of a former internment camp in the Sunshine Valley in Hope, BC.

Recommended:  The above-mentioned John Axford is driving from Oakland, CA to Hamilton, ON by himself and is documenting his road trip on Instagram.  Follow John here and check out his entertaining Twitter account too.