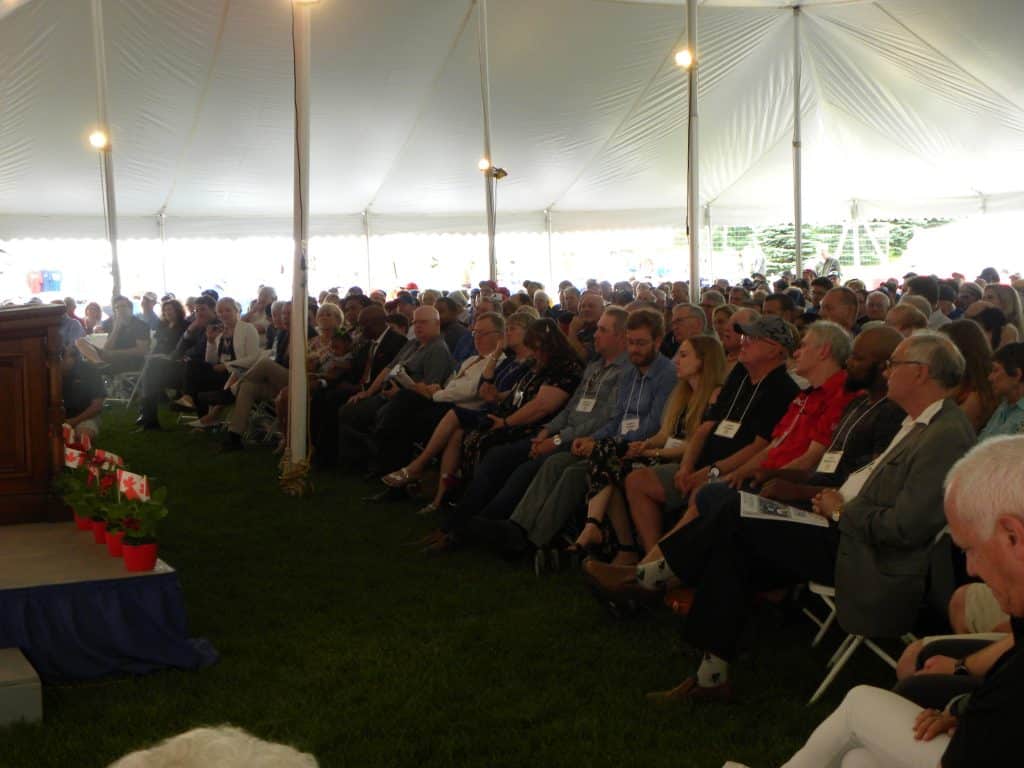 The weeks around induction ceremonies are always crazy busy at the office and things are just now getting back to normal busy.  Among other things, our summer students beavering away on our artifacts database and Top of the Tenth is back.

This year’s induction event was another great success.  We held six different events over the three days and each one ran smoothly. The weather cooperated – a good thing as we had to cancel all 24 games scheduled on our diamonds the following weekend – friendships were made and renewed and we can safely say that a good time was had by all. Among the best things about induction are the speeches.  Bill Humber gave a shout-out to CBHFM founder Bruce Prentice, as well as many others, and Lloyd Moseby expressed special thanks to Paul Beeston in an emotional speech.  After the ceremonies, a more relaxed Moseby returned to the VIP tent for a bite, saying he hadn’t eaten since 1776! Charles Gordon, brother of Jack Graney award winner Alison Gordon also gave a touching address.  Alison, by the way, wrote a series of baseball mystery novels that are worth looking for. Plus the Randy Echlin Lifetime Volunteer award was presented to John Starzynski.

We actually record the ceremonies each year for posterity and this year’s will be available for sale later this summer.  The release date will be announced in this column.

Volunteers of course are key to the success of the event with over 100 of them used for induction weekend from setup to cleanup.  One of them, Lorraine Charrette, helped us out for her seventh straight year, coming all the way from Ottawa to do so. The former Administrator for the Ottawa Lynx wouldn’t miss the event for anything.  While helping us out, she gets to renew acquaintances with many people who passed through the Lynx organization. A highlight for her this year was meeting Bill Lee and his wife Diana.

Another Bill Lee fan was blogger Ruben Lipzsyc, who travelled even farther for the event.  We’ve retweeted the Calgary resident’s account of his experience on our Twitter account. Ruben’s blog also led us to the website albertadugoutstories.com ‘Tales of Baseball From Wild Rose Country’.  Worth checking out and also on Facebook.

Also recommended is the US Library of Congress’s Baseball Americana exhibit, which opened June 29.  It’s online and has a FB page. On July 31 at 2:30 p.m. Eastern Daylight time, those of us who won’t be going to Washington can attend a webinar called Batter Up! Baseball at the Library of Congress . Pre-registration is required. Museum update:  There a few things to be done on the outside of the museum.  Then, for the next several months, we tackle the inside. BaAM the interior museum design firm was back in town last week to continue their work.

Other news:  Scott Smith joined CBHFM’s Board of Directors in May. Scott is a Managing Director at BMO Capital Markets in the Equity Capital Markets group and lives in Toronto with his wife and two children.  A lifelong Montreal Expos fan, Scott started following the Blue Jays in 2004 and attends baseball spring training every year. He was fortunate enough to throw out the first pitch at the Jays game in which Jose Bautista hit his 50th home run in 2010. Coming up: July is extremely busy with five tournaments taking place on our diamonds.  We are about to host our 5th onsite wedding when Steph and Kerri get married at home plate on July 21.  The following week, Scott Crawford will join an enthusiastic Montreal bunch in Cooperstown again this year for Vladimir’s Induction into the National Baseball Hall of Fame on July 29.