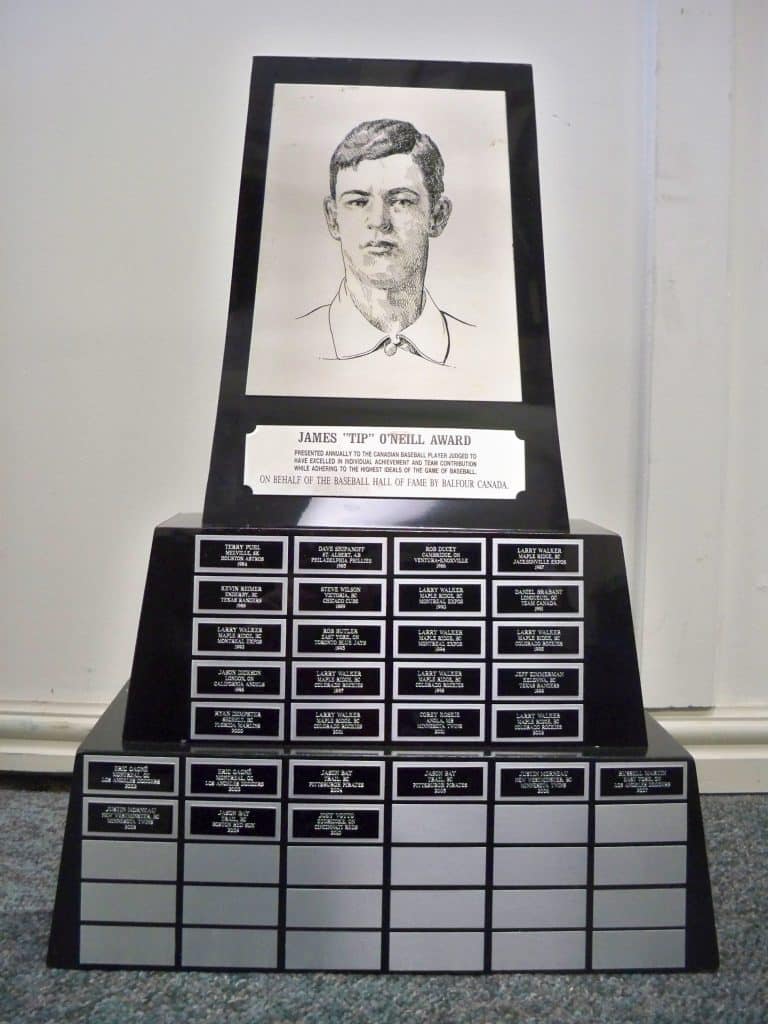 St. Marys, Ont. – One batted .408 after the All-Star break and led the National League in on-base percentage, while the other belted a career-high 24 home runs and played in his first All-Star Game.

Yes, Joey Votto (Etobicoke, Ont.) and Michael Saunders (Victoria, B.C.) enjoyed excellent seasons in 2016. But so too did catcher Russell Martin (East York, Ont.), who socked 20 home runs and was the backbone of the Toronto Blue Jays pitching staff and Tyler O’Neill (Maple Ridge, B.C.), who was named Baseball America’s double-A Player of the Year and the Seattle Mariners Minor League Hitter of the Year.

And while these Canadians were starring in North America, several others were shining in the international and amateur ranks. Scott Richmond (Vancouver, B.C.)  hurled 152-2/3 innings for the championship-winning EDA Rhinos of the Chinese Professional Baseball League, while fellow Vancouver native Scott Mathieson posted a 2.36 ERA and tied for the Japan Central League lead with 70 appearances for the Yomiuri Giants. Meanwhile, Canadian Women’s National Team MVP Amanda Asay (Prince George, B.C.) recorded two complete-game victories and hit .333 to propel her squad to a berth in the gold medal game at the Women’s Baseball World Cup in Gijang, Korea in September.

That’s the dilemma the Canadian Baseball Hall of Fame faces, and they would like your input to determine Canada’s top performer as they prepare to chose their 2016 James “Tip” O’Neill Award winner. This honour is given out annually to the player judged to have excelled in individual achievement and team contribution while adhering to baseball’s highest ideals.

The Hall encourages you to vote for the players you think are worthy of this award by noon E.T. on Thursday, November 24. You can e-mail your top three choices (please be clear on your first, second and third selections) to baseball@baseballhalloffame.ca or you can vote on the Hall’s website at www.baseballhalloffame.ca.

Fan votes will be one of the criteria the Hall will take into account when selecting the winner, which will be announced on December 2.

Here’s a summary of the prime contenders (and their 2016 accomplishments) in alphabetical order. (The Hall also welcomes write-in votes for players not on this list): This long-time national team member registered complete-game victories in both of her starts at the Women’s Baseball World Cup in Gijang, Korea in September to lead Canada to a berth in the gold medal game. In her two tournament starts, she posted a 1.00 ERA and registered 16 strikeouts and helped her own cause by batting .333 with two doubles and three RBI. For her efforts, she was named national team MVP. Co-winner of the 2011 Tip O’Neill Award, Axford posted a 3.97 ERA in 68 appearances (14th most in the American League) for the Oakland A’s. The 6-foot-5 right-hander struck out 60 batters in 65-2/3 innings and collected 15 holds. He was particularly effective in the season’s second-half when he fashioned a 2.67 ERA in 29 appearances. A strong spring earned this 34-year-old right-hander a spot in the New York Mets bullpen. In 44 regular season appearances, Henderson racked up 40 strikeouts in 35 innings and finished with a 4.37 ERA. He also broke Halifax, N.S., native Vince Horsman’s record for most career games pitched (141) by a Canadian without making an error.

Traded to the Chicago White Sox prior to the 2016 campaign, this sparkplug second baseman In the second year of his five-year contract with the Blue Jays, this hard-nosed catcher, who was raised in Montreal, walloped 20 home runs, collected 74 RBI and registered 64 walks (16th in the American League). A leader behind the plate and in the clubhouse, Martin was the Blue Jays Player of the Month in August when he belted nine home runs and posted a .626 slugging percentage in 24 games. Defensively, he recorded the highest Range Factor per Nine Innings (RF/9) of his career (8.79). In October, Martin established a new mark for most career postseason hits (36) by a Canadian, surpassing Tip O’Neill himself. The Canadian catcher was also active in charitable endeavors for the Jays Care Foundation, most prominently lending his name to the first annual 55 Poker Classic, which raised over $170,000 for projects that will aim to shrink the opportunity gap for marginalized children across Canada. In his fifth season with the Yomiuri Giants of the Japan Central League, this 6-foot-3 right-hander tied for the league lead in appearances (70) and ranked third in strikeouts per nine innings (11.0). He also finished fifth in strikeout-to-walk ratio (4.45) and 11th in the league in WHIP (1.088). After undergoing off-season elbow surgery, this three-time Tip O’Neill Award winner signed with the Chicago White Sox and hit .261 with six home runs in 58 games. The left-handed hitting slugger was particularly potent against left-handed pitching, posting a .528 slugging percentage in 19 contests. For the past eight years, Morneau and his wife, Krista, have organized a Casino Night to raise money for the Arthritis Foundation, a cause that’s close to Morneau’s heart because his niece, Madelyn, suffers from juvenile rheumatoid arthritis. Also in recent years, the couple has spearheaded the Winter Warm-Up Coat Drive for the Salvation Army in Minneapolis. In 130 games for the Southern League’s double-A Jackson Generals, this 21-year-old outfielder socked 24 home runs, swiped 12 bases and improved his on-base percentage to .374. He also helped lead the Generals to a league title and was selected as championship series MVP. For his efforts, he was named Baseball America’s double-A Player of the Year, the Mariners’ Ken Griffey Jr. Award recipient as the club’s Minor League Hitter of the Year and the Canadian Baseball Network’s Randy Echlin Award winner (as top Canadian minor league offensive player). In his fourth big league season, this Canadian lefty struck out a career-high 117 batters in 121 innings in 20 starts for the Seattle Mariners. He posted a 3.79 ERA, but his Fielding Independent Pitching (FIP) was even better at 2.80. Paxton was also one of the Mariners’ most reliable pitchers down the stretch when he posted a 3.23 ERA in nine starts in the season’s final two months. This 37-year-old right-hander registered nine wins and hurled 152-2/3 innings for the EDA Rhinos of the Chinese Professional Baseball League (CPBL) to help lift the club to a Taiwan Series championship. His incredible snare of a line drive comebacker on August 13, which he converted into a double play, was one of the most watched international baseball highlights this year. You can watch it here. That snag helped earn him the CPBL’s equivalent of a Gold Glove, as the league’s top fielding pitcher. In his first predominantly injury-free season with the Blue Jays, this 6-foot-4 outfielder notched career highs in home runs (24), doubles (32), total bases (234), slugging percentage (.478) and on-base plus slugging percentage (OPS) (.815). On June 17, he clubbed three home runs and drove in eight runs in a game against the Baltimore Orioles to tie Canadian records for most home runs and RBI in a big league game. His .298 batting average and .551 slugging percentage in the first-half earned him his first All-Star Game appearance. He also excelled at the plate in the playoffs, batting .429 and clubbing a home run in the American League Championship Series. This five-time Tip O’Neill Award winner batted .408 in the season’s second-half to become one of just seven players in major league history to bat over .400 after the All-Star break in a season. The Cincinnati Reds first baseman led the National League in on-base percentage (.434), times on base (294) and OPS+ (160). Votto also finished second in the National League in OPS (.985) and walks (108), third in batting average (.326), sixth in slugging percentage (.550) and eighth in hits (181). His 2016 campaign represented just the 19th time in major league history that a Canadian finished a season with a batting average over .300, an on-base percentage over .400 and a slugging percentage over .500. For his efforts, he was nominated for the National League’s Hank Aaron Award and finished seventh in the National League MVP voting. Votto is also heavily involved with the Cincinnati Reds Community Fund, the club’s non-profit arm that’s dedicated to improving the lives of youth. He also regularly visits the Cincinnati Children’s Hospital Medical Center and participates in meet and greets with patients and staff at the ballpark throughout the season. After making his major league debut on August 19, this 24-year-old southpaw appeared in seven more games – including one start – for the World Champion Chicago Cubs down the stretch. He finished the campaign with a 1.13 ERA and struck out 17 batters in 16 innings. As a reward, he was named to the Cubs’ National League Championship Series roster. Prior to his big league call-up, Zastryzny had collected 10 wins in 24 games in double-A and triple-A.