Canadian Baseball Hall of Fame to present Tip O’Neill Award to Vladimir Guerrero Jr. and Jack Graney Award to John Lott on May 18 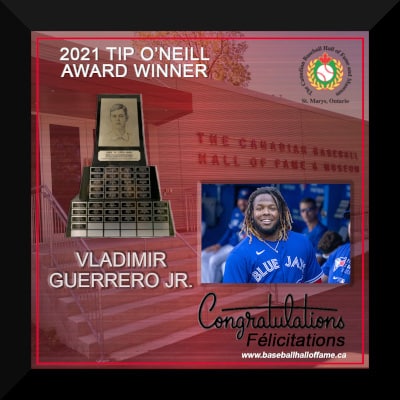 Canadian Baseball Hall of Fame to present Tip O’Neill Award to Vladimir Guerrero Jr. and Jack Graney Award to John Lott on May 18

St. Marys, Ont. – Montreal-born Toronto Blue Jays slugger Vladimir Guerrero Jr. will be presented with the Canadian Baseball Hall of Fame’s 2021 Tip O’Neill Award in a ceremony prior to the Toronto Blue Jays game against the Seattle Mariners at Rogers Centre on Wednesday, May 18.

John Lott, the legendary baseball writer for the National Post and The Athletic, will also be presented with the 2021 Jack Graney Award.

“We are excited to honour Vladimir Guerrero Jr. for his tremendous breakout season in 2021 in front of Blue Jays fans at his home stadium,” said Jeremy Diamond, chair of the Canadian Baseball Hall of Fame’s board of directors. “And it also seems fitting to present John Lott with the Jack Graney Award at Rogers Centre where he spent so much time crafting his compelling articles in the press box.”

Guerrero Jr. is a first-time recipient of the Tip O’Neill Award, which the St. Marys, Ont.-based shrine presents annually to the Canadian player judged to have excelled in individual achievement and team contribution while adhering to baseball’s highest ideals.

In 2021, Guerrero Jr. topped big league players born in Canada in almost every offensive category. The Montreal-born slugger was the American League leader in on-base percentage (OBP) (.401), slugging percentage (.601), on-base plus slugging percentage (OPS) (1.002), runs (123) and total bases (363). He also led the major leagues in the latter two categories and flirted with a Triple Crown, finishing the season third in the American League in batting average (.311), tied for first in home runs (48) and tied for fifth in RBIs (111). His 48 home runs also broke Eddie Mathews’ record set in 1953 for most homers in a season by a major league player 22 years old or younger.

For his efforts, he was named to the American League All-Star team for the first time and homered in the Midsummer Classic to earn the game’s MVP honours.

“I’m honoured to receive this award,” said Guerrero Jr. “It’s an honour to be honoured in the country I was born in. Thank you to the Canadian Baseball Hall of Fame. I hope to win this award again in the future.”

The highly respected Lott, who was widely considered the conscience of the Blue Jays’ beat before his retirement in 2020, will be presented with the Jack Graney Award for his more than two decades of outstanding work with the National Post and The Athletic.

Born in 1944 in Gettysburg, Pa., Lott grew up on his family’s farm a few miles from town. He developed a passion for baseball when he seven years old when he started playing catch with his Uncle John. His uncle built a batting tee out of pipe fittings and a radiator hose and taught him how to swing level and hit line drives.

“By the time I reached my late teens, however, it was clear my dream of major-league stardom was rapidly fading,” wrote Lott in his retirement column for The Athletic in October 2020. “But by then I had another dream, which I never talked about because it seemed outlandish for a kid stuck on the family farm in 1960. My ambition was to cover a major-league baseball team. Forty years later, I finally did.”

Lott caught the Journalism bug when he was named co-sports editor of his high school newspaper. After he graduated from Penn State University, he moved to Ontario and began his professional Journalism career in 1969 when he served as a general reporter for the Newmarket Era, a community newspaper, until 1975. He then moved on to a position as the editor of the Aurora Banner newspaper from 1975 to 1980.

In 1980, he was appointed Journalism coordinator at Centennial College in Toronto and he taught there for more than 20 years. But his passion for baseball never waned. In 1998, he launched the TruNorth Baseball website, which focused on Canadian players and Blue Jays prospects whom he interviewed during his summer travels to minor league venues in Canada and the U.S. The site was in operation for three years.

His work on TruNorth Baseball helped him land a freelance position, covering the Toronto Blue Jays, for the National Post in 2000. In 2004, he took early retirement from teaching to focus on his new career as a baseball writer with the National Post. He would excel in that position for 16 years, while also finding time to co-author, along with Shi Davidi, the 2013 book, Great Expectations: The Lost Toronto Blue Jays season.

Beginning in October 2016, Lott was the senior baseball writer for The Athletic Toronto. While in that role, he was named the winner of the 2018 Sports Media Canada George Gross Award for outstanding sportswriting.

He continued to pen memorable articles for The Athletic and mentor young reporters until his retirement in October 2020.

“When Scott Crawford called to tell me I’d been chosen to receive the Jack Graney Award, I was floored,” said Lott. “The previous week I’d watched the virtual induction speeches of the two previous winners, Ken Fidlin and Dan Shulman, and marveled at their long and distinguished careers. My reaction to Scott’s news was that I don’t belong in the same league as those guys, whom I know and respect. I still feel that way, but I’m also deeply grateful that the selection committee felt I was deserving enough to be included in the elite group of previous winners. This is a wonderful coda to a career in baseball that brought me great pleasure, good friends and the luxury of never having to buy a ticket to a ball game.”

Born in St. Thomas, Ont., Jack Graney was a scrappy leadoff hitter in the big leagues for Cleveland. His big league resume boasts a number of firsts. When he walked to the plate in a game against the Boston Red Sox on July 11, 1914, he became the first batter to face Babe Ruth. Almost two years later, on June 26, 1916, he was the first major leaguer to bat wearing a number on his uniform. After hanging up his spikes, Graney became the first ex-player to make the transition to the broadcast booth, performing radio play-by-play for Cleveland from 1932 to 1953. He passed away in 1978. In December 2021, Graney was named the National Baseball Hall of Fame’s 2022 Ford C. Frick Award winner, which is handed out annually for broadcasting excellence.