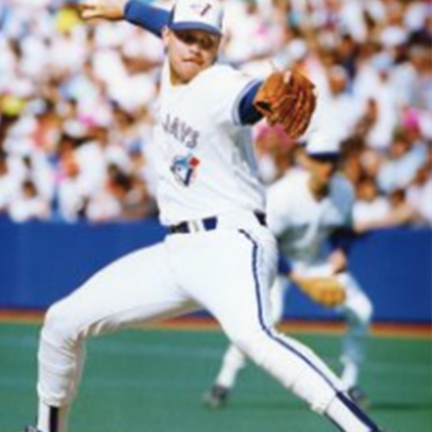 Selected in the first round (ninth overall) of the 1982 MLB draft by the Atlanta Braves, Duane Ward was dealt to the Blue Jays for Doyle Alexander on July 6, 1986. From 1988 to 1992, the hard-throwing right-hander established himself as one of the best shutdown set-up men in the game, combining with closer and 2011 Canadian Baseball Hall of Fame inductee Tom Henke to form the most overpowering and beloved bullpen tandem in franchise history.

In his five seasons serving primarily in a set-up role, Ward never made less than 64 appearances or pitched less than 101 innings. In 1991, the workhorse righty topped American League pitchers with 81 appearances and struck out a career-best 132 batters in 107 1/3 innings and finished ninth in the American League Cy Young voting. He followed that up by registering a career-best 1.95 ERA in 79 appearances in 1992 to help the Blue Jays to their first World Series title.

After Henke departed via free agency following the 1992 season, Ward assumed the closer’s role and excelled, topping the American League with 45 saves and 70 games finished in 1993, while allowing just 49 hits and striking out 97 batters in 71 2/3 innings. For his efforts, he was selected to the American League All-Star team and finished fifth in AL Cy Young voting. His 45 saves and 70 games finished remain single-season franchise records. His performance helped propel the Blue Jays to their second consecutive World Series title.

In 1992 and 1993, Ward was at his best in the Fall Classic. In a combined eight World Series appearances, he posted a 3-0 record with a 1.13 ERA while striking out 13 batters in eight innings, and also registering two saves.

In total, in nine seasons with the Blue Jays, Ward appeared in 452 games, the second-most by a pitcher in franchise history. He is also second in saves (121) and games finished (266).

Since his retirement as a player, Ward has been an active member of the club’s alumni in many charitable efforts. In recent years, he has been one of the lead instructors at baseball clinics for the Toronto Blue Jays Academy and the Jays Care Foundation.

“When I was informed about my induction into the Canadian Baseball Hall of Fame, the only thing I felt at the time was, completely overwhelmed, a flood of feelings and emotions came after a few minutes of reflection and thought,” said Ward. “I can’t state enough how deeply honoured I am to be a part of the 2020 class of inductees to the Canadian Baseball Hall of Fame.

“I want to thank all of my teammates, coaches, and everyone who helped me through the years. And to my family and friends who supported me unconditionally, saying thank you will never be enough. To my fellow inductees, ‘Congratulations.’”