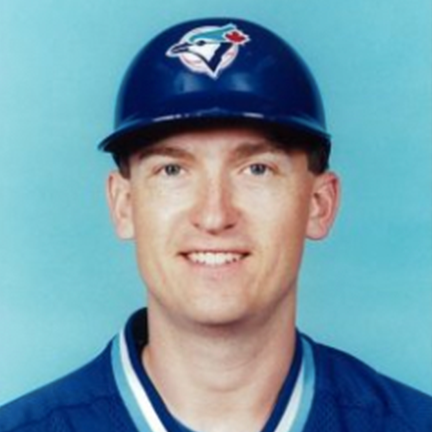 After being selected in the third round of the 1989 MLB draft out of Washington State University, Olerud signed with the Blue Jays and went directly to the big leagues. A standout pitcher/first baseman in college, Olerud made his major league debut on September 3, 1989 and singled in his first big league at bat. With that, he became just the second Blue Jays’ draft pick to make their organizational debut at the big league level (Catcher Brian Milner was the first in 1978).

After three hits in eight at bats that September, the sweet-swinging first baseman earned regular playing time, primarily as the team’s DH, in 1990 and he proceeded to belt 14 home runs and post a .364 on-base percentage in 111 games. For his efforts, he was named the team’s top rookie and he finished fourth in the American League Rookie of the Year voting.

Smooth in the field and at the plate, Olerud would become the Blue Jays’ regular first baseman beginning in the 1991 season. From 1991 to 1993, he was a key part of three consecutive division-winning squads and two World Series championship teams. His breakout campaign came in 1993, when he flirted with .400 for much of the season and ended up with a .363 batting average to become the first – and still only – Blue Jays’ player to win an American League batting title. In that historic season, he also topped the circuit in doubles (54), on-base percentage (OBP) (.473) and on-base plus slugging percentage (OPS) (1.072), and finished third in the American League MVP voting.

Olerud was dealt to the New York Mets for pitcher Robert Person on December 20, 1996. He starred for the Mets for three seasons prior to playing for his hometown Seattle Mariners for parts of five campaigns. He finished his career with stints with the New York Yankees and Boston Red Sox. In all, in his 17-year big league career, the two-time All-Star and three-time Gold Glove Award winner finished with a .295 batting average, a .398 OBP (which ranks 65th in major league history) and 2,239 hits.

In 2007, Olerud was inducted into the National College Baseball Hall of Fame and nine years later, he was chosen as the Pac-12 Conference Player of the Century for his standout play as a hitter and on the mound.

“When I heard that I was going to be inducted into the Canadian Baseball Hall of Fame, I was very surprised. It was so unexpected,” said Olerud. “I am very honoured to be selected.”