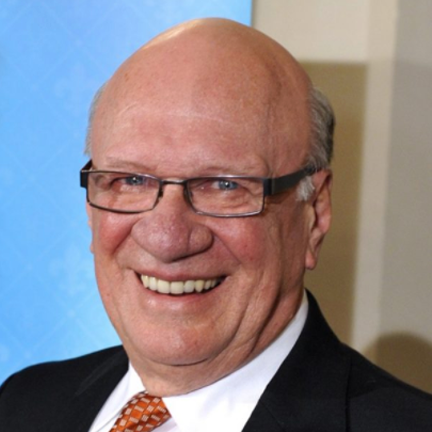 Born in Montreal in 1940, Jacques Doucet has been calling major league baseball games for more than four decades and many Quebec baseball fans credit him as the reason they fell in love with the sport

Doucet served as a Montreal Expos beat reporter for La Presse from the time the franchise was awarded to the city in 1968 to 1971. He began performing play-by-play for the Expos’ French language radio broadcasts in 1972 and continued for 33 seasons. Along the way, he called virtually every meaningful game in the franchise’s history, including 2016 Canadian Baseball Hall of Fame inductee Dennis Martinez’s perfect game on July 28, 1991. For many years, Doucet also broadcast major league playoff and World Series games in French.

In 2019, he was one of eight finalists for the National Baseball Hall of Fame’s 2020 prestigious Ford C. Frick Award.

Doucet has also been a strong supporter of baseball at the grassroots level in Quebec. As an ambassador for Baseball Quebec, he has been an active supporter of many fundraising activities for minor baseball teams in the province. He also served as an executive with the Quebec Junior Elite Baseball League from 2004 to 2010 and was involved in the Quebec Summer Games held in Longueuil in 2014.

“I am deeply honored to be admitted into the Canadian Baseball Hall Fame. Although I had won the Jack Graney Award in 2004, I could not, in all honesty, say that I was a full-fledged member of the Canadian HOF. This, along with the Medal of Honor of the National Assembly of the Province of Québec, are the two highest honor I have received, I want to thank all the partners whom I had the privilege to work with during all the years and who made this possible. I want to thank the members of the selection committee of the HOF for making this day possible.”