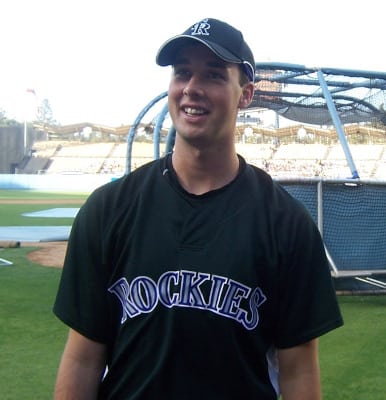 Born in Vancouver in 1981, Jeff Francis grew up in North Delta, B.C. He honed his skills with the North Delta Blue Jays of the B.C. Premier Baseball League before starring on the mound for the University of British Columbia Thunderbirds from 1999 to 2002, where he was twice selected a NAIA First Team All-American.

After the 2001 collegiate season, the 6-foot-5 lefty went 7-1 in the highly competitive Alaskan Baseball League and captured the circuit’s Player of the Year honours. His performance convinced the Colorado Rockies to select him in the first round (ninth overall) in the 2002 MLB draft.

His third season in the Rockies’ organization was his true breakout campaign. That season, he combined to go 16-3 with 2.21 ERA with 196 strikeouts in 154 2/3 innings in 24 starts for Double-A Tulsa and Triple-A Colorado Springs. His dominance earned him Minor League Player of the Year honours from Baseball America and USA Today, as well as a big league call-up at the end of the season.

In all, in an 11-season career that saw him toe the rubber for the Rockies, Kansas City Royals, Cincinnati Reds, Oakland A’s, New York Yankees and Toronto Blue Jays, Francis finished with 72 major league wins, which is the second-most by a Canuck left-hander. He also ranks second all-time among Canadian southpaws in games started (217) and innings pitched (1,291).

Among all Canadian major league pitchers (left-handers and right-handers), he ranks fifth in starts, seventh in wins and eighth in strikeouts (869) and innings pitched.

Francis has also competed for the Canadian national team on multiple occasions, including with the Junior National Team in 1999, the World Baseball Class squad in 2006 and on the gold medal-winning team at the 2015 Pan Am Games. In 2016, he became the eighth person added to Baseball Canada’s Wall of Excellence.

“I was so excited to get the news from the Hall of Fame of my induction,” said Francis. “When I see the list of people and players that I will be joining on the walls in St. Marys, I’m honoured and humbled to be considered to be on that level. This is not something that is ever in an athlete’s mind during his or her playing days, but in the time since my last days of playing, I’ve become proud of what I accomplished in baseball. I consider this not just a recognition of my achievements in the game, but of the coaching, mentorship, and support I’ve received from so many other people.”