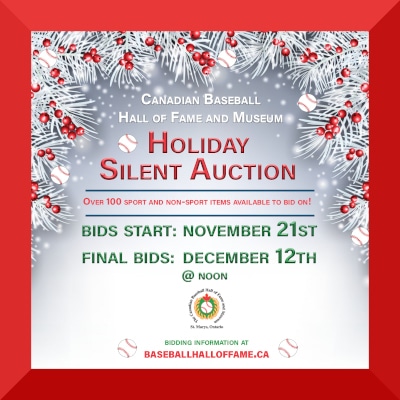 Our 19th annual Holiday Silent Auction has started and is a key fundraiser for the Canadian Baseball Hall of Fame. All proceeds from the auction will go towards archiving our vast collection, the programs we run and our 32 acre site.

100 items and almost $22,000 in items available to bid on so don’t miss this great opportunity to bid on some unique sport and non-sport items.

AGAIN THIS YEAR….all bidding done directly online at the link below. However, items will be at our museum and if you wish to see them in person and if you need any assistance with the auction please email baseball@baseballhalloffame.ca or call 519-284-1838.

***Extended bidding this year!***
The Extended Bidding feature automatically extends the end time of an item by 3 minutes when it receives a bid during the final 3 minutes. This allows bidders to relax during the end of an auction knowing they’ll have time to enter a new bid if they’re outbid in the final 3 minutes, making it easier to maintain their lead on one or more items.

Take a look at some of the items in our auction:

Baseballs signed by: Hall of Famers Larry Walker, Pedro Martinez, Joe Carter, Tim Raines, Rob Thomson, plus Eric Gagne, plus Blue Jays such as George Springer, Bo Bichette; plus Expos such as the 1984 team, Charlie Lea; plus others like Ronald Acuna Jr. and many more….

Bats signed by: Vladimir Guerrero Jr, Pedro Martinez, Justin Morneau, plus our Canadian Cy Young bat signed by Fergie Jenkins and Eric Gagne and many other bats to choose from.

Bobbleheads: Over a dozen to bid on!