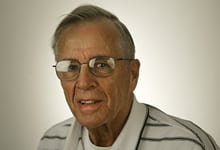 St. Marys – The phone call to Ian MacDonald that went from St. Marys, Ontario through Montreal, Quebec, down to West Palm Beach, Florida, covered all the bases, just as the baseball writer extraordinaire did when he was one of the Montreal Gazette’s beat writers for the Montreal Expos from 1970 until the club was moved to Washington, D.C., at the conclusion of the 2004 season.

MacDonald, 81, has been named the recipient of the 2009 Jack Graney Award, presented by the Canadian Baseball Hall of Fame to a representative of the media who has made a significant contribution to the game of baseball in Canada through their life’s work. The honour is not necessarily presented annually, but rather, at a time when the Ball Hall deems it to be appropriate. The award is basically the Canadian equivalent to National Baseball Hall of Fame in Cooperstown’s Ford Frick Award. The last Graney Award was presented in 2005 to Len Bramson of TBS Sports.

“I am stunned and overjoyed to hear this news today,” said MacDonald on vacation in West Palm Beach, where he spent so much time covering the Expos during Spring Training.

“Yes, writing about baseball was my job. But for me, covering the Expos was truly a labour of love.”

MacDonald, who was born and raised in Montreal, established himself as a writer in 1940’s with the tabloid Montreal Herald. The Montreal Star owned the Herald, and transferred him to the Star to cover collegiate and amateur sports beginning in 1953. He took on the Alouettes and the CFL beat in 1959 and then joined the Gazette when they offered him the Expos beat beginning in 1970. He was the president of the Montreal Chapter of the Baseball Writers Association of America (BBWAA) for 15 years, and served as chair of the national association in 2001. He has also covered the Olympic Games, Grey Cups, Super Bowls, World Series, World championships in skiing, swimming and motor sports and one year the Stanley Cup. He treasures the memory of covering Nancy Greene’s Olympic medal win at Grenoble, France in 1968. MacDonald won national awards for his ski and swim writing.

As a youngster, MacDonald had competed at the national level in swimming and in 1950 he was the captain of the Central YMCA team that won the Canadian Senior Water Polo Championship.

“The Expos were involved in the pennant chases and every game meant something – those were wonderful years!”

MacDonald, while saddened that the Expos folded their tent in Canada, actually felt relieved when the operation moved to Washington.

“Quite frankly, it was a blessing, because the last couple of years were miserable and disappointing to witness.”

Commenting on the computer age, MacDonald referred to himself as being able to make the adjustments but always being a poor speller, a lousy typist and having a bad vocabulary.

“One of the big advantages for me was that I knew how to find a story, do the research, and I had the intense desire and patience necessary to get to the bottom of it. Today, google.com looks after a lot of that, and so the skill isn’t as appreciated.”

MacDonald, retired now for eight years, still writes the occasional column, entitled “Where are they now?”. He has an easy time describing his favourite ritual.

“To pick up the Gazette and pour through it first thing in the morning is still the best part of my day.

“After that, especially when I am down in Florida, I enjoy running into friends that I made in the baseball industry. I love seeing Steve Rogers and Andre Dawson and Felipe Alou, and so many others, as well as the front office people and the lifelong Expos fans that are still around.”

MacDonald will be formally presented the Graney plaque and trophy in a ceremony that will be announced in 2010.

Jack Graney, who was born in St. Thomas, Ontario, had a career of “firsts.” He was the first major league batter to face Babe Ruth (1914), the first player to bat wearing a number on his uniform (1916), the first Canadian to pinch hit in a World Series game (1920), and he became the first former player to broadcast a baseball game on radio. The well-known media personality called Cleveland Indians’ games from 1932 to 1953. He was inducted into the Canadian Baseball Hall of Fame in 1984.