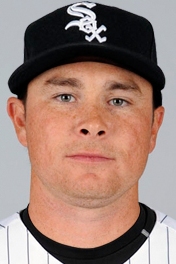 Son of Downie farmers coming into his own.

St. Marys – For most of his life, around these circles anyway, he’s been known as Tom and Kathleen Teahen’s grandson, or Mike Teahen’s boy, or, due to their connection with the Canadian Baseball Hall of Fame, Gerry Teahen’s nephew, or Tom Teahen’s cousin.

But Mark Teahen’s name now stands alone, whether it is a Stonetowner doing the talking, or a Chicago south-sider.

Born in Redlands, California but holding duel citizenship, “The Big Tractor,” (as he is known by due to his country style and mannerisms) was fast-tracked to the major leagues by the Kansas City Royals as a 23-year-old in 2005, and despite being bounced around in the batting order as well as from third baseman to outfielder to first baseman and even second baseman, he has found his groove, averaging a hit per game over the past five years and bashing an average of a dozen homers per year.

Shortly after being traded to the Chicago White Sox on November 5th in exchange for Chris Getz and Josh Fields, the 2009 Hutch Award winner for his efforts on and off the field signed a three-year deal for a tidy $14 million USD. While he now has financial security for life, he is equally pleased that skipper Ozzie Guillen has told him that game of defensive musical chairs is over – that he’ll be stationed at third base for good.

Teahen was selected in the 2002 draft by the Oakland Athletics while attending, where else … St. Mary’s College (in Moraga, California). The A’s traded him to Kansas City in 2004. He played for Team Canada in the 2009 World Baseball Classic.

The apple didn’t fall too far from the maple tree, as his father Mike, born and raised on a farm in Downie Township, also wore the Maple Leaf on his jersey. The right-handed hitting catcher began by playing fastball at Teddy’s Field for the St. Marys Chevys, who were coached by Bob Dunseith, Lou Corriveau and Vic Hearn. Number 27 then moved on to play baseball for the Stratford Kraven Knits, who became the Stratford Hillers of the prestigious Inter-County League. From there, Mike went on to play in the Alberta Senior Men’s League and donned the Team Canada uniform from 1973 through 1979.

Mark, who was also nominated for the 2009 Roberto Clemente Award, won the Hutch Award, presented annually to the major leaguer who best exemplifies Fred Hutchinson’s honour, courage and dedication on and off the field. Hutchinson died of cancer at the age of 45. The award, which will be officially presented to Mark in Seattle on January 27th at the Fred Hutchinson Cancer Research Centre, is even more special due to Mark having witnessed his mother Marty’s successful battle with breast cancer this past year. Teahen won mainly for being a key spokesman and fundraiser for the YMCA Challenger Baseball program that gives children with physical or mental challenges a chance to play baseball.

“Mark is a hard-working, dedicated young man who always has time for is family and friends” boasted his uncle Gerry, who still lives in St. Marys.

Teahen, who has returned to St. Marys a handful of times, and has visited the Canadian Baseball Hall of Fame, had 142 hits in 133 games, including a career-high 34 doubles and 12 homeruns, as well as a .271 batting average, a .325 on-base percentage, a .408 slugging percentage, 50 runs batted in, 69 runs scored, and even swiped eight bases.

One of only 237 Canadians to ever each the major leagues, Teahen’s .517 slugging percentage in 2006 was the highest ever recorded by a Canadian third baseman. He is already in the top 20 for Canadians in virtually every offensive category. He is one of only five Canucks to ever record five hits in the same game (April 17, 2009). The others were Justin Morneau, who has done it twice, Rob Ducey, Kevin Reimer and Pete Ward. He is also one of only 19 Canadians to hit a grand slam (Sept. 22, 2005).

“You play the game to play in the playoffs, and every year I tried to convince myself we made enough moves to be competitive,” said Teahen on mlb.com of his time with the Royals.

“You were hoping every piece fell into place there or some player would turn into the guy you hoped he would turn into. The nice thing with Chicago is that for the first time with the team we have in place, guys don’t have to overachieve or come into their own for the team to be successful.”