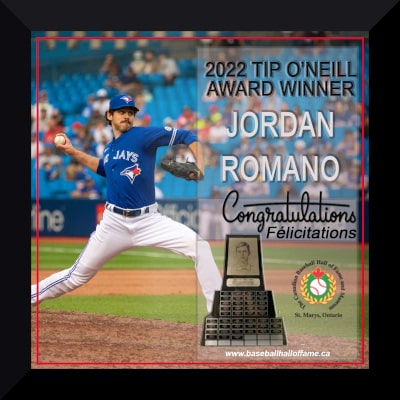 Romano, who saved 36 games and was selected to his first MLB All-Star Game in 2022, is a first-time winner of the award. He staved off strong competition from fellow major leaguers Cal Quantrill (Port Hope, Ont.) and Vladimir Guerrero Jr. (Montreal, Que.) to secure the honour.

“Jordan Romano had one of the best major league seasons ever by a Canadian relief pitcher, and the fact that he enjoyed it with the Blue Jays, his hometown team, made it even more special,” said Jeremy Diamond, chair of the Canadian Baseball Hall of Fame’s board of directors. “Several Canadians had outstanding major league seasons, but Jordan’s performance really stood out. We’re proud to recognize him with this award.”

In 63 games in 2022, the hard-throwing Romano recorded a 2.11 ERA, which is the eighth best ERA ever by a Canuck reliever that has thrown at least 50 innings in a season.

The Markham, Ont., native also registered 36 saves, which was the third most in the American League, and he also became the first Canadian to register 30 saves in a season for a Canadian major league team. Eric Gagne (Mascouche, Que.), John Axford (Port Dover, Ont.) and John Hiller (Toronto, Ont.) are the only three Canadians to have registered more saves in a single major league season.

Despite being used exclusively as a late-inning reliever, Romano topped all Canadian major league pitchers in 2022 with a 2.9 WAR (Wins Above Replacement). He also held opponents to a .190 batting average.

Romano was at his best in the second half for the Blue Jays, posting a 1.50 ERA with 16 saves, while striking out 34 batters in 30 innings, in 28 appearances.

The Canadian righty also finished first among American League pitchers in Win Probability Added (3.7) and third in games finished (52). For his efforts, he was named American League Reliever of the Month in April and July and was a first-time All-Star.

The 2022 campaign was Romano’s fourth with the Blue Jays. After honing his skills with Ontario Blue Jays and Junior National Team, Romano was selected in the 10th round of the 2014 MLB draft by the Blue Jays. He made his major league debut on June 12, 2019 at the age of 26.

Romano has been active in charitable and community endeavors.

“This is really special to win this award,” said Romano. “I’ve followed the award over the years and I have a lot of respect for the previous winners. It will be great to have my name on the trophy alongside their names. Thank you to everyone who voted for me.”

Details about the presentation of the 2022 Tip O’Neill Award will be announced in the coming months.

To determine the winner of the Tip O’Neill Award, the Hall takes into account a number of criteria, including each candidate’s on-the-field performance, contributions to their team, community and charitable endeavors and their support in fan voting. The Hall also has a Tip O’Neill Award committee, consisting of a panel of Canadian baseball experts, that votes on the honour.

PrevPreviousWill YOU Step Up to the Plate and Support the Canadian Baseball Hall of Fame and Museum?
NextRemarkable story of Ferguson “Fergie” Jenkins to inspire youthNext