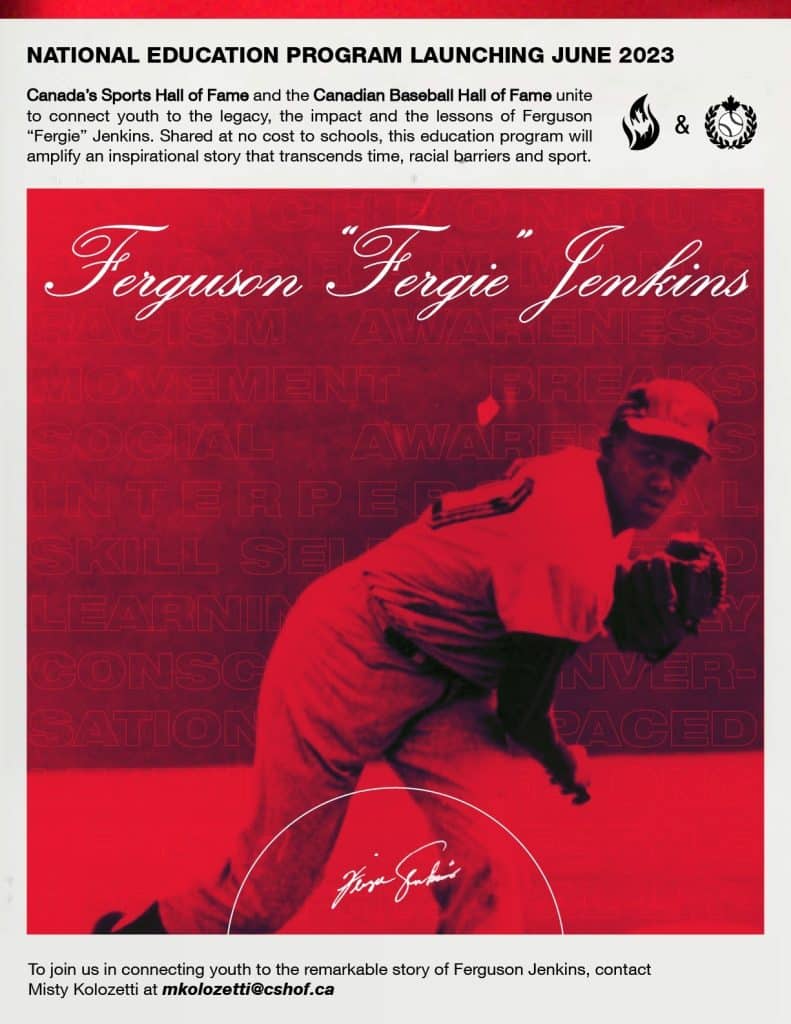 Calgary, AB – Youth across Canada will be provided the opportunity to learn from and be inspired by the journey of one of this nation’s most prolific athletes in the sport of baseball, Ferguson “Fergie” Jenkins. The project was jointly undertaken by two national sport heritage institutions, as the iconic baseball player celebrates his 80th birthday.

Inspiring the leaders of tomorrow through the invaluable lessons of sport is at the core of Canada’s Sports Hall of Fame’s (CSHoF) mission. Through the organization’s web-based education platform – www.beyondthewin.ca – classrooms across Canada are provided with curriculum-aligned education programs and resources at no cost. In 2023, youth will have access to four (4) newly launched asynchronous program modules, sharing the lessons and impact of Ferguson Jenkins’ story. This is another demonstration of CSHoF’s commitment to connect youth to outstanding Canadian sport role models.

Canada’s Sports Hall of Fame President and CEO, Cheryl Bernard shares the following: “we have worked extensively to provide an accessible, free education hub where teachers, students and coaches can easily access a variety of education assets. We are so proud to be developing and presenting a new asynchronous program, celebrating his 80th birthday and honouring Ferguson Jenkins as a role model in this country, in collaboration with Ferguson and the Canadian Baseball Hall of Fame.”

“Teaming up with Canada’s Sports Hall of Fame to tell the story of Hall of Famer Fergie Jenkins and his impact on sports history in Canada is a remarkable way to connect today’s youth with the past,” said Jeremy Diamond, Chair, Board of Directors of the Canadian Baseball Hall of Fame and Museum. “We look forward to bringing this story alive and sharing it with Canadians of all ages.”

The first module of the education program will begin rolling out in June 2023 with all four (4) modules accessible to schools for the start of the 2023/24 school year.

About the Canadian Baseball Hall of Fame:
The Canadian Baseball Hall of Fame and Museum is located in St. Marys, Ontario. The Hall of Fame and Museum commemorates great players, teams, and accomplishments of baseball in Canada. The Museum was founded in November 1982 in Toronto at Exhibition Place and later moved to Ontario Place theme park. In August 1994, it was awarded to St. Marys, Ontario and in June 1998 the doors officially opened in St. Marys.  The Hall of Fame and Museum is dedicated to preserving Canada’s baseball heritage which dates back to June 4, 1838, when a game which very closely resembled today’s game of baseball was played in Beachville, Ontario. The CBHFM annually hosts 700+ kids’ events on site and have developed to include baseball fields, museum space and trails. The Hall of Fame hosts an annual Induction Ceremony to recognize those who have contributed to the development of Canadian baseball.