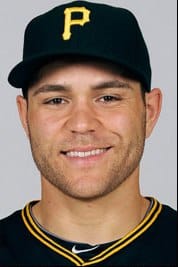 St. Marys – One won the National League batting title and the other was named the Wilson Defensive Player of the Year at the catching position and is now one of the most coveted free agents on the market.

Yes, Justin Morneau (New Westminster, B.C.) and Russell Martin (Montreal, Que.) enjoyed outstanding seasons in 2014. But so, too, did Dalton Pompey (Mississauga, Ont.), who rocketed through the Toronto Blue Jays system to make his big league debut on September 2 and James Paxton (Ladner, B.C.), who posted a 3.04 ERA in 13 starts. And while these Canadians were excelling in the big leagues, several others were shining in the minor-pro and international ranks.

The Hall encourages you to vote for the players you think are worthy of this award by midnight E.T. on Thursday, November 27. You can e-mail your top three choices (please be clear on your first, second and third selections) to baseball@baseballhalloffame.ca or you can vote on the Hall’s website at www.baseballhalloffame.ca.

Le vote du public est l'un of the criteria the Hall will take into account when selecting the winner, which will be announced on December 3.

Co-winner of the 2011 Tip O’Neill Award, Axford appeared in a combined 62 games with the Cleveland Indians and Pittsburgh Pirates and posted a 3.95 ERA. The right-handed reliever registered 10 saves for the Indians to pull within nine saves of John Hiller (Toronto, Ont.) for second-place on the all-time Canadian list. Axford joined the Pirates on August 14 and struck out 12 batters in 11 innings down the stretch to help the Bucs secure a wild-card showdown with the San Francisco Giants.

The Toronto Blue Jays sparkplug infielder belted a career-high 12 home runs, despite playing in just 70 games. Sidelined by a broken finger and an oblique injury for much of the season, Lawrie still knocked in 38 runs and supplied sparkling defence at both second and third base.

In his finest season since 2007, Martin batted .290, posted a .402 on-base percentage (the highest by a Canadian and a National League catcher in 2014) and recorded 110 hits, including his 1,000th career hit on August 13 to become the first Canadian catcher to reach that milestone. A Gold Glove finalist, Martin led all major league backstops in defensive runs saved (12), threw out 39 per cent of runners attempting to steal off of him and was a key reason the Pirates’ pitching staff finished with a National League Central division-best 3.47 ERA. For his efforts, he was named the Wilson Defensive Player of the Year for the catching position and ranked 13e in the NL MVP voting.

After signing with the Colorado Rockies prior to the season, Morneau captured his first batting title (.319) in 2014. In doing so, Morneau became only the third Canadian (along with Larry Walker (Maple Ridge, B.C.) and Tip O’Neill (Woodstock, Ont.)) to accomplish that feat. A participant in this year’s Home Run Derby at the all-star game, Morneau led Canadians in most offensive categories and was second amongst NL first basemen in slugging percentage (.496) and on-base plus slugging percentage (.364). On top of his offensive contributions, Morneau was a Gold Glove finalist, a NL Comeback Player of the Year nominee and he finished 24e in NL MVP voting. He was also selected to suit up for a post-season all-star team that travelled to Japan.

After making a strong impression in his first four big league starts in September 2013, this Canadian lefty continued to perform superbly for the Seattle Mariners this season. In fact, in his first 14 major league starts – dating back to 2013 – Paxton’s ERA stood at 1.73, which was the third-best ERA a starting pitcher has ever registered in their first 14 starts, behind only Canadian Baseball Hall of Famer Steve Rogers (1.31 for the Expos in 1973) and Tony Bonham (1.67 for the Yankees in 1940 and 1941). Paxton finished the season with six wins and a 3.04 ERA in 13 starts.

This 6-foot-5 right-hander won 13 games and fanned 98 batters in 132-1/3 innings in 25 starts with the Washington Nationals’ Class-A Hagerstown Suns. For his efforts, he was selected to the South Atlantic League All-Star Game and was named the Canadian Baseball Network’s Minor League Pitcher of the Year. The 21-year-old hurler is now considered one of the Nats’ top pitching prospects.

This fleet-footed outfielder posted a .392 on-base percentage and swiped 43 bases at three different levels in the Blue Jays’ organization. His performance earned him the Canadian Baseball Network’s Minor League Player of the Year honours. Pompey was rewarded with a big league call-up on September 2 and Jays fans won’t soon forget his performance on September 26, when he notched two triples and a double and made a highlight-reel catch in centre field. In all, the exciting 21-year registered a .436 slugging percentage in 17 major league games.

After toiling for parts of 12 seasons in the minors, Romak made his big league debut with the Los Angeles Dodgers on May 28. His first big league hit was a two-run double off of Colorado Rockies reliever Matt Belisle in the sixth inning of a Dodgers’ 6-1 win on June 8. In Triple-A, the 29-year-old slugger belted 24 homers and recorded a .538 slugging percentage in 108 contests for the Albuquerque Isotopes.

This six-foot-four outfielder batted .273 and belted eight homers in 78 games for the Seattle Mariners. Saunders was also the recipient of the Al “Moose” Clausen Community Service Award, which is presented annually by the Seattle Mariners’ RBI club to a member of the organization who has made significant contributions to the community.

Savoie was named MVP of the Canadian national women’s team for a third consecutive year. In six games at the Women’s Baseball World Cup in Miyazaki, Japan, the Canadian catcher recorded nine hits and three walks to finish with a .450 batting average and a .500 on-base percentage. Defensively, she threw out a tournament-best, six runners attempting to steal against her. For her efforts, Savoie was named the catcher on the tournament’s all-star squad.

Limited to 62 games by a quad strain, Votto still posted an impressive .390 on-base percentage and socked 16 doubles and continued to be one of the best defensive first basemen in the National League. In November, Votto was elected to the Etobicoke Sports Hall of Fame.

The Hall’s Tip O’Neill award is named after Woodstock, Ont., native James “Tip” O’Neill, who was one of Major League Baseball’s first legitimate stars. With the American Association’s St. Louis Browns in 1887, O’Neill set big league records in hits, doubles, slugging percentage and total bases, while compiling a major league record .492 batting average. Walks were counted as hits in 1887, but if O’Neill’s average was calculated by today’s standards, it would be .435, the second highest in big league history to Hugh Duffy who hit .440 in 1894.