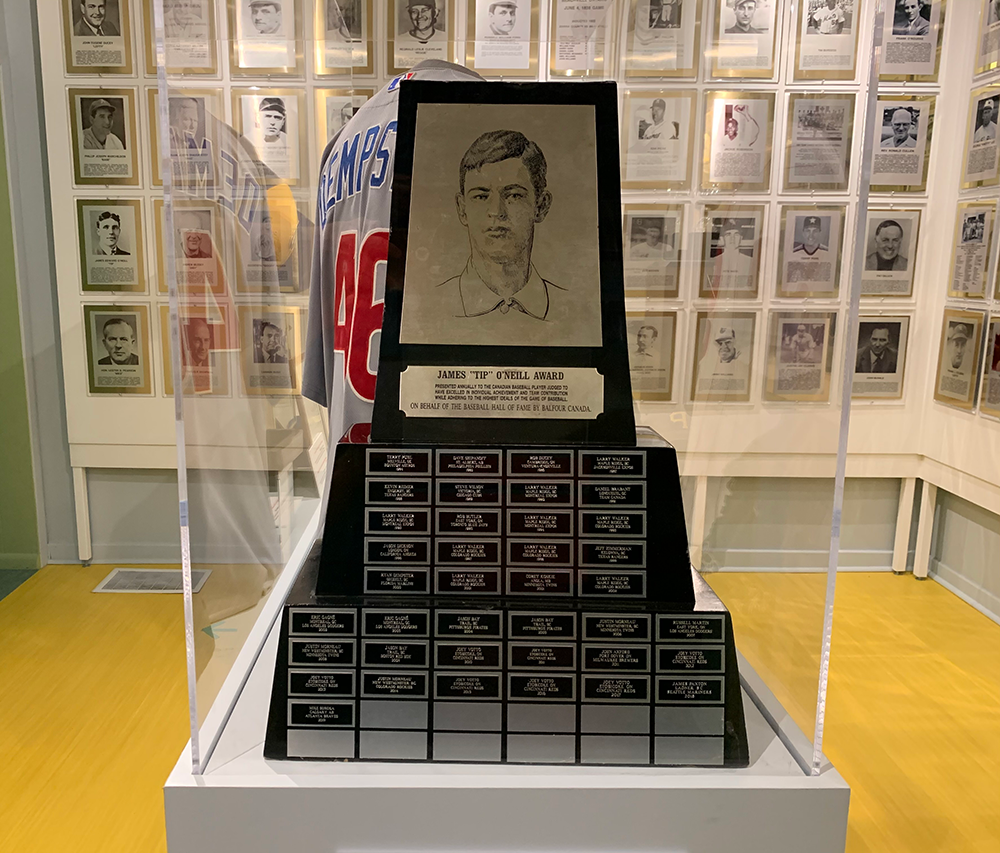 Two Toronto Blue Jays stars and a 15-game winner with the Cleveland Guardians are the top candidates for the 2022 Tip O’Neill Award.

The Canadian Baseball Hall of Fame presents this award annually to the player judged to have excelled in individual achievement and team contribution while adhering to baseball’s highest ideals.

And they weren’t the only Canadians to star in the big leagues in 2022. Guardians slugger Josh Naylor (Mississauga, Ont.) belted 20 home runs in a season for the first time and Boston Red Sox right-hander Nick Pivetta (Victoria, B.C.) tied for the American League lead in starts (33).

Aside from Romano, a trio of other Canadians – Zach Pop (Brampton, Ont.) with the Blue Jays, Rowan Wick (North Vancouver, B.C.) with the Chicago Cubs and Matt Brash (Kingston, Ont.) with the Seattle Mariners – established themselves as go-to relievers for their respective clubs.

Brash was also one of four Canadians to make their major debuts in 2022. The others were Charles Leblanc (Laval, Que.) with the Miami Marlins, Bo Naylor (Mississauga, Ont.) with the Guardians and Jared Young (Prince George, B.C.) with the Cubs.

Meanwhile, Ellie Jespersen (Spruce Grove, Alta.) was excelling at the top of the Women’s National Team batting order, which earned her the team’s 2022 MVP honours.

So, in a year with so many highlights, how do you choose which Canadian stood out the most?

That’s the dilemma the Canadian Baseball Hall of Fame faces, and they would like your input to determine Canada’s top performer as they prepare to choose their 2022 James “Tip” O’Neill Award winner.

The Hall encourages you to vote for the players you think are worthy of this award by 5 p.m. E.T. on Tuesday, November 22. You can e-mail your top three choices (please be clear on your first, second and third selections) to baseball@baseballhalloffame.ca.

Fan votes will be one of the criteria the Hall will take into account when selecting the winner, which will be announced on December 6.

Here’s a summary of the prime contenders for the 2022 Tip O’Neill Award in alphabetical order. (The Hall also welcomes write-in votes for players not on this list):

After beginning the season in the Mariners’ rotation, Brash was successfully converted into a reliever. During one 16-game stretch from August 17 to September 24, the Canuck right-hander did not allow a run. In total, after joining the M’s bullpen on July 9, the 24-year-old righty registered a 2.35 ERA in 34 appearances and struck out 43 batters in 30 2/3 innings. In a combined 39 appearances (including five starts), he posted a 4-4 record with a 4.44 ERA and struck out 62 batters in 50 2/3 innings. He also tossed 3 1/3 scoreless innings in the postseason.

This 6-foot-8 right-hander was having another strong season for the Chinese Professional Baseball League’s Uni-President 7-Eleven Lions before being forced to undergo back surgery in August. In 12 starts, he posted a 3-3 record and a 2.96 ERA, while fanning 50 batters in 73 innings.

The 23-year-old Blue Jays first baseman topped players born in Canada in almost every offensive category, including hits (175), runs (90), home runs (32) and RBIs (97). He also finished in the top 10 in several American League statistical categories, including tied for fifth in RBIs, sixth in hits and tied for seventh in home runs. For his efforts, he was the starting first baseman for the American League in the All-Star Game. He also won his first Gold Glove Award.

Jespersen excelled at the top of the Women’s National Team’s batting order in 2022. The Alberta native played second base and was one of the team’s top performers at the Friendship Series in Thunder Bay, Ont., when she batted .375 and collected hits in all five games. Her four runs in that series topped her team.The 19-year-old infielder, who joined the national team in 2019, figures to be a key member of the Canadian squad for many years to come.

In his second pro season in the Minnesota Twins’ organization, Julien batted .300 and posted a .441 on-base percentage (OBP) and a .931 on-base plus slugging percentage (OPS) in 113 games for the Double-A Wichita Wind Surge. He also belted 17 home runs, walked 98 times and stole 19 bases. The Junior National Team alum continued to swing a hot bat in the Arizona Fall League (AFL) for the Glendale Desert Dogs, finishing with a .400 batting average in 21 games to lead the circuit. He also topped the AFL with a .563 OBP and 1.248 OPS. For his efforts, he was named AFL Breakout Player of the Year and the second baseman on Baseball America’s Double-A All-Star Team.

This versatile Canadian received his first promotion to the big leagues on July 29 when he was called up by the Marlins. Prior to his call-up, he was batting .302 with 14 home runs and 45 RBIs in 87 games and was leading the Triple-A Jacksonville Jumbo Shrimp with 96 hits and a .381 OBP. With the Marlins, Leblanc played 26 games at second base, 13 at third base and eight at first base. In total, in 48 big league games, he batted .263 with four home runs, 10 doubles and 12 walks. Following the season, he was named MVP of the Triple-A Jumbo Shrimp.

The younger brother of Josh was promoted to the Guardians’ roster on October 1 and he proceeded to appear in five major league games. He was also on the club’s postseason roster. Before his big-league call-up, the 22-year-old catcher batted .263 with a .392 OBP, while belting 21 home runs and stealing 20 bases, in 118 games between Double-A and Triple-A. For his efforts, Baseball America named him the Guardians’ Minor League Player of the Year and he was named to the International League All-Star Team.

Returning from a devastating leg injury, Naylor set career-bests with 20 home runs and 79 RBIs in 2022. In 122 games for the Guardians, he also set career-highs in hits (115), doubles (28) and runs (47). The left-handed hitting slugger was at his best in July when he hit .333 with five home runs and had a .974 OPS in 19 games. Naylor also registered six hits in seven postseason contests, including a home run in Game 4 of the American League Division Series (ALDS) against the New York Yankees at Progressive Field.

Prior to a hamstring injury that ended his season on September 17, O’Neill batted .228 with 14 home runs and 56 RBIs in 96 games for the St. Louis Cardinals. He also topped Canadian big leaguers with 14 stolen bases. The two-time Gold Glove Award-winning left fielder was at his best in June when he batted .354 and had a .906 OPS in 13 contests.

After the Blue Jays acquired him from the Marlins on August 2, Pop developed into a reliable middle reliever for the club, posting a 2-0 record a 1.89 ERA in 17 appearances. In a combined 35 regular season games between the Blue Jays and the Marlins, he went 4-0 with a 2.77 ERA and fanned 25 in 39 innings. He also threw 1/3 of an inning in relief in Game 1 of the Blue Jays’ Wild Card Series against the Mariners.

Romano emerged as one of the best closers in the big leagues in 2022. In 63 games, the hard-throwing Canuck recorded a 2.11 ERA, which is the eighth best ever by a Canadian reliever that has thrown at least 50 innings in a season. Romano also registered 36 saves, which was the third most in the American League and became the first Canadian to register 30 saves in a season for a Canadian major league team. Eric Gagne (Mascouche, Que.), John Axford (Port Dover, Ont.) and John Hiller (Toronto, Ont.) are the only three Canadians to have registered more saves in a single season. Despite being used exclusively as a late-inning reliever, Romano topped all Canadian pitchers in 2022 with a 2.9 WAR (Wins Above Replacement). He also held opponents to a .190 batting average. For his efforts, he was named American League Reliever of the Month in April and July and was a first-time All-Star.

For the second time in his major league career, Toro reached double-digits in home runs, belting 10 in 109 games for the Mariners. The versatile Canuck also added 36 runs, 60 hits, 13 doubles and 22 walks. The switch-hitting Canadian, who was on the Mariners’ postseason roster, was also one of the club’s top pinch-hitters, going 4-for-12 (.333 batting average) during the regular season.

This 6-foot-3 right-hander topped all Canadian big-league pitchers with 64 appearances in 2022. A late-inning stalwart in the Cubs’ bullpen, Wick posted a 4.22 ERA and registered nine saves, while striking out 69 in 64 innings. He was particularly strong in the second half when he recorded a 3.42 ERA in 25 games.

Young made his major league debut with the Cubs on September 16. Batting sixth and playing first base, he recorded his first big league hit when he doubled off Colorado Rockies reliever Justin Lawrence in the eighth inning of the Cubs’ 2-1 win at Wrigley Field. The 27-year-old Canuck proceeded to go 5-for-19 (.263 batting average) in six games for the Cubs. Young also batted .230 with 17 home runs in 109 games at Triple-A Iowa in 2022.

The Hall’s Tip O’Neill Award is named after Woodstock, Ont., native James “Tip” O’Neill who was one of Major League Baseball’s first legitimate stars. With the American Association’s St. Louis Browns in 1887, O’Neill set then big-league records in hits, doubles, slugging percentage and total bases, while compiling a major league record .492 batting average. Walks were counted as hits in 1887, but if O’Neill’s average was calculated by today’s standards, it would be .435, the second highest in big league history to Hugh Duffy who hit .440 in 1894.