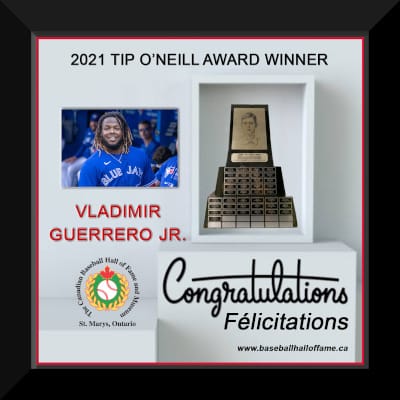 “Vladimir Guerrero Jr. had a tremendous breakout year in 2021. He was a Triple Crown contender for much of the season,” said Jeremy Diamond, chair of the Canadian Baseball Hall of Fame’s board of directors. “Several Canadians had outstanding major league seasons, but his offensive numbers were unquestionably the best. We’re proud to recognize him with this award.”

Guerrero Jr. was the American League leader in on-base percentage (OBP) (.401), slugging percentage (.601), on-base plus slugging percentage (OPS) (1.002), runs (123) and total bases (363). He also led the major leagues in the latter two categories and flirted with a Triple Crown, finishing the season third in the AL in batting average (.311), tied for first in home runs (48) and tied for fifth in RBIs (111). His 48 home runs also broke Eddie Mathews’ record set in 1953 for most homers in a season by a major league player 22 years old or younger.

For his efforts, the Blue Jays slugger was named to the American League All-Star team for the first time and homered in the Midsummer Classic to earn the game’s MVP honours.

He also provided strong defence in his first full season at first base. His 8.06 Range Factor/Game ranked third among American League first basemen.

The 2021 campaign was his third with the Blue Jays. He made his major league debut on April 26, 2019 at the age of 20. His father is Montreal Expos legend and Canadian Baseball Hall of Fame inductee Vladimir Guerrero. Guerrero Jr. was born in Montreal when his father was playing for the Expos.

“I’m honoured to receive this award,” said Guerrero Jr. “It’s an honour to be honoured in the country I was born in. Thank you to the Canadian Baseball Hall of Fame. I hope to win this award again in the future.”

Details about the presentation of the 2021 Tip O’Neill Award will be announced in the coming months.

To determine the winner of the Tip O’Neill Award, the Hall takes into account a number of criteria, including each candidate’s on-the-field performance, contributions to their team, community and charitable endeavors and their support in fan voting. The Hall also has a Tip O’Neill Award committee, consisting of a panel of Canadian baseball experts, that votes on the honour.