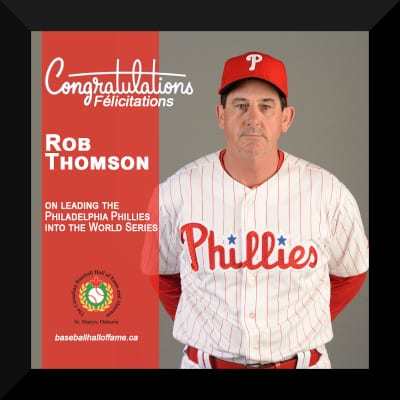 Rob Thomson (Corunna, Ont.) will become the first Canadian to manage a team in the World Series in 135 years when he leads his Philadelphia Phillies against the Houston Astros in Game 1 of the Fall Classic on Friday.

The 2019 Canadian Baseball Hall of Fame inductee, who has piloted his underdog Phillies to upset series wins over the St. Louis Cardinals, Atlanta Braves and San Diego Padres this postseason, is set to become the second Canadian World Series skipper, joining Bill Watkins (Brantford, Ont.) who guided the National League’s Detroit Wolverines past the American Association’s St. Louis Browns in the 1887 World Series.

The Phillies were 22-29 on June 2 when Thomson replaced Joe Girardi in the Phillies’ dugout and proceeded to guide the club to a 65-46 record during the regular season. This made Thomson just the fourth manager in major league history to take over a team at least seven games under .500 and lead them to the postseason. The other three skippers to accomplish that are Dick Howser (1981, Kansas City Royals), Cito Gaston (1989, Toronto Blue Jays) and Jim Tracy (2009, Colorado Rockies).

Thomson has also become the first manager to replace another manager during the season to lead their club to a World Series berth since Jack McKeon with the Florida Marlins in 2003.

But while this might be Thomson’s first trip to the World Series as a manager, he has no shortage of postseason experience. During his close to three decades as a coach in the New York Yankees’ organization, he earned five World Series rings and was the club’s third base coach on their most recent World Series-winning squad in 2009. He was also a bench coach on the 2015 and 2017 Yankees squads that advanced to the postseason.

The only time these two clubs have met in the postseason was in the 1980 National League Championship Series before the Astros transferred to the American League. That series is widely considered to be one of the most exciting, best-of-five postseason series in major league history. Each of the final four games were decided in extra innings, and while the Phillies ultimately prevailed, it wasn’t without a fight from 1995 Canadian Baseball Hall of Fame inductee and Houston Astros outfielder Terry Puhl (Melville, Sask.). Puhl set a then postseason record with 10 hits and a .526 batting average in that series.

There will not be a player born in Canada competing in this year’s Fall Classic, but some Canucks have excelled in the World Series in the past. Here’s a rundown of some of the most notable performances:

O’Neill, who was one of the Canadian Baseball Hall of Fame’s inaugural inductees in 1983, competed in four World Series with the American Association’s St. Louis Browns from 1885 to 1888. His best performance came in 1886 against Cap Anson and the National League’s Chicago White Stockings. In that series, O’Neill topped the Browns with eight hits, two home runs, two triples and a .400 batting average and propelled the Browns to a championship in six games. In four World Series, O’Neill batted a combined .240 with 35 hits.

This 2006 Canadian Baseball Hall of Fame inductee went 6-for-12 (.500 batting average) for the New York Giants in the 1913 World Series, but that wasn’t enough to lift his club past the Philadelphia A’s who captured the championship in five games. The 6-foot-5 Canadian catcher topped the Giants in hits and batting average and had multi-hit contests in Games 2 and 4.

Selkirk, who replaced Babe Ruth in right field for the Yankees, earned five World Series rings with the Bronx Bombers during his career, but his best performance came in his first trip to the Fall Classic. On September 30, 1936, Selkirk homered off Giants ace Carl Hubbell in his first World Series plate appearance to become the first Canadian to go deep in their first World Series at bat. The 1983 Canadian Baseball Hall of Fame inductee continued to be a steady contributor during the series, going 8-for-24 (.333 batting average), scoring six runs, while adding another home run in Game 5. The Yankees won the series in six games. For his career, Selkirk had 18 hits and batted .265 in 21 World Series games.

In a combined seven innings (four relief appearances) for the Cardinals in the 1964 World Series and the Mets in 1969, Taylor did not allow a hit or a run. In Game 4 of the 1964 World Series, the 1985 Canadian Baseball Hall of Fame inductee hurled four scoreless innings in relief to record the save in Cardinals’ 4-3 win over the New York Yankees. Five years later, Taylor collected his second World Series save in Game 2 of the 1969 World Series when he got Baltimore Orioles all-star Brooks Robinson to ground out with two outs and two runners on base in the ninth inning to preserve a 2-1 victory. Both the Cardinals and Mets won their respective World Series. Taylor also collected two more World Series rings as the Toronto Blue Jays team doctor in 1992 and 1993.

When Cleveland started Game 5 of the 1975 World Series for the Red Sox against the Cincinnati Reds, he became the first Canadian pitcher to start a Fall Classic game. The 1986 Canadian Baseball Hall of Fame inductee allowed five runs in five innings and took the loss in the Reds’ 6-2 win. The Canadian righty also made two relief appearances in that series, logging 1 1/3 scoreless innings in Game 3 and recording the final out in the top of the ninth in the seventh and deciding game.

The St. Louis Cardinals were swept by the Boston Red Sox in the 2004 World Series, but no one could pin their loss on Walker. In the only taste of Fall Classic action in his 17-season big league career, the 2009 Canadian Baseball Hall of Fame inductee went 5-for-14 (.357 batting average) while starting in right field for the Cardinals. In his first World Series game, Walker had four hits – including a home run and two doubles. He added another home run in the ninth inning of Game 3.