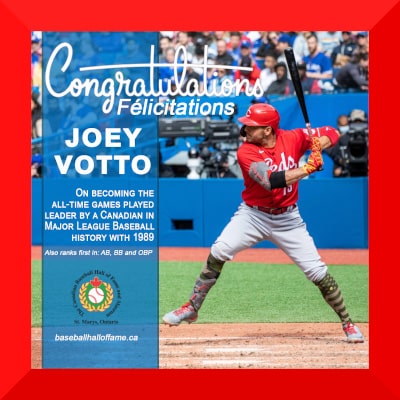 Representatives from the Canadian Baseball Hall of Fame will be in attendance at The Great All-American Ball Park to present Votto with a plaque to commemorate the accomplishment following the contest.

“To break Larry Walker’s all-time games record is a testament to Joey Votto’s determination, resiliency and enduring skills,” said Jeremy Diamond, chair of the Canadian Baseball Hall of Fame’s board of directors. “Best of all, Joey has carried himself with dignity and class throughout his career and he continues to be a role model and inspiration for players in Canada. Congratulations to him on this tremendous accomplishment.”

The games played record is the most recent all-time Canadian major league mark that Votto has claimed. The Etobicoke, Ont., native is already the all-time Canuck leader in at bats, plate appearances, walks and All-Star Game selections (six).

Selected by the Reds in the second round of the 2002 MLB draft, Votto is in his 16th major league season with the club and is considered one of the best hitters of the past two decades. The Canuck infielder has topped the National League in on-base percentage seven times, in walks five times and has batted over .300 in eight full seasons.

“We are proud to honour Joey’s tremendous accomplishment, but we hope to make more of these presentations in the future as he continues his record-breaking career,” said Diamond.