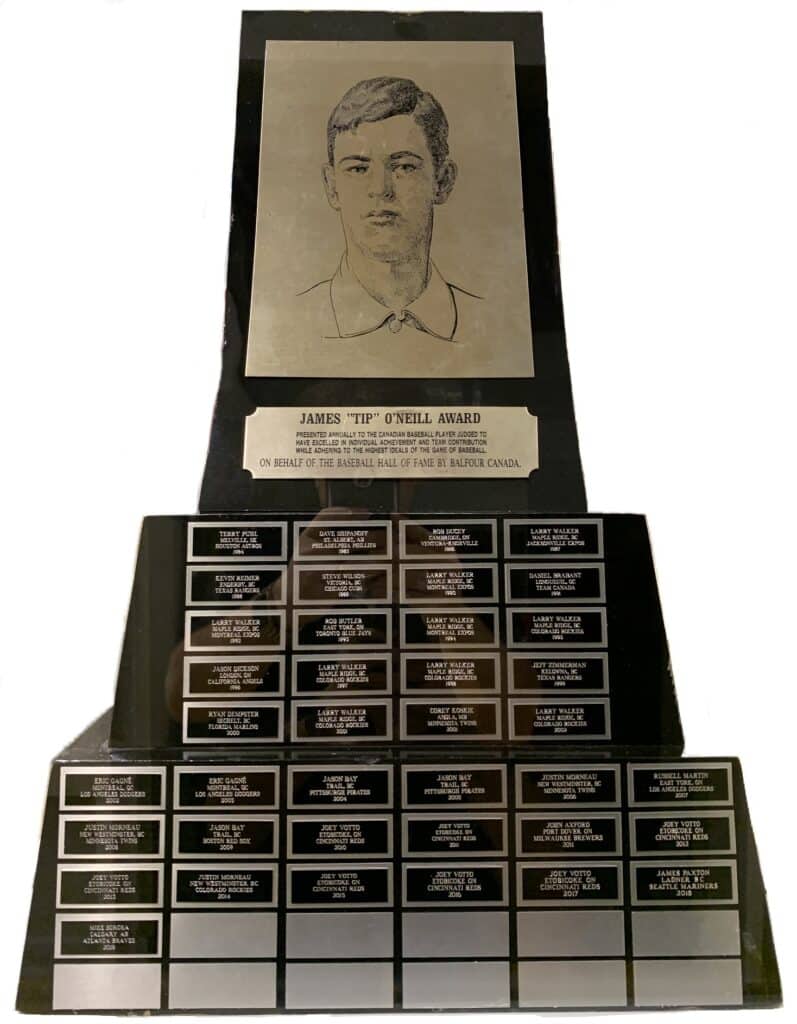 St. Marys, Ont. – It’s likely the strongest crop of Tip O’Neill Award candidates in the history of the award.

On the mound, Cal Quantrill (Port Hope, Ont.), Jordan Romano (Markham, Ont.) and Nick Pivetta (Victoria, B.C.) also shone. With a 1.94 ERA after the All-Star break, Quantrill was Cleveland’s ace down the stretch. Meanwhile, Romano posted a 2.14 ERA and registered 23 saves as the Blue Jays’ closer and Pivetta struck out 175 batters in 155 regular season innings for the Boston Red Sox and emerged as the team’s most reliable pitcher in the postseason.

And while those Canadians were starring in North America, Brock Dykxhoorn (Goderich, Ont.) was dominating hitters for the Uni-President 7-Eleven Lions in the Chinese Professional Baseball League, going 17-4 with a 1.83 ERA in 27 appearances (26 starts). And Jamie Romak (London, Ont.), in his last professional season, belted another 20 home runs for the SSG Landers of the Korean Baseball Organization.

That’s the dilemma the Canadian Baseball Hall of Fame faces, and they would like your input to determine Canada’s top performer as they prepare to choose their 2021 James “Tip” O’Neill Award winner. This honour is given out annually to the player judged to have excelled in individual achievement and team contribution while adhering to baseball’s highest ideals.

The Hall encourages you to vote for the players you think are worthy of this award by 5 p.m. E.T. on Tuesday, November 23. You can e-mail your top three choices (please be clear on your first, second and third selections) to baseball@baseballhalloffame.ca.

Fan votes will be one of the criteria the Hall will take into account when selecting the winner, which will be announced on December 7.

Here’s a summary of the prime contenders and their 2021 accomplishments in alphabetical order. (The Hall also welcomes write-in votes for players not on this list):

The 6-foot-8 right-hander has been dominant for the Chinese Professional Baseball League’s Uni-President 7-Eleven Lions in 2021. In 25 appearances, including 24 starts, he has posted a 17-4 record and a 1.83 ERA, while fanning 157 batters in 181 2/3 innings. His WHIP is also an impressive (0.894). Dykxhoorn ranks near the top of almost every important statistical category among CPBL starting pitchers.

Naylor batted .253 with seven home runs and 21 RBIs in 69 games with Cleveland before suffering multiple leg fractures in an on-field collision with a teammate on June 27 that ended his season. He also scored 28 runs, had 13 doubles and 14 walks. The Junior National Team alum had his strongest month in May when he belted five of his home runs and posted a .438 slugging percentage.

On top of winning his second consecutive Gold Glove and Fielding Bible awards for his defence in left field, O’Neill enjoyed a breakout season at the plate for the St. Louis Cardinals. He batted .286 with 34 home runs, while registering a .560 slugging percentage, which was the fifth-best in the National League. His 6.3 WAR (Wins Above Replacement) was fourth-best among National League position players. The Junior National Team grad also stole 15 bases, making him one of just three Canadian players – joining Larry Walker and Votto – to have at least 34 home runs and 15 stolen bases in the same season. O’Neill also batted .328 and clubbed 13 homers in 32 games in September/October to earn National League Player of the Month honours. Following the season, he was named an All-MLB Team finalist, a Silver Slugger Award finalist among National League outfielders and finished 8th in the NL MVP award.

Pivetta finished the regular season with a 9-8 record and a 4.53 ERA and struck out 175 batters in 155 innings in 31 appearances, including 30 starts. The Junior National Team alum topped all Canadian pitchers in wins, innings pitched, starts and strikeouts. Pivetta also earned a save in the final game of the regular season, with a Wild-Card berth at stake and was arguably the Red Sox best pitcher in the postseason. In Game 3 of the American League Division Series against the Tampa Bay Rays, Pivetta struck out seven in four scoreless innings in relief to pick up the win. The hard-throwing righty also became just the eighth Canadian to start a postseason game when he got the nod against the Houston Astros in Game 4 of the American League Championship Series and allowed just one run in five innings.

After starting the season in Cleveland’s bullpen, Quantrill joined the starting rotation and evolved in the team’s ace in the second half. His 1.94 ERA in 14 starts after the All-Star break was the second-best in Major League Baseball for starting pitchers who tossed at least 55 innings. Quantrill, who finished the season with an 8-3 record in 40 appearances (22 starts), ended up leading Cleveland in innings pitched (149 2/3). Overall, the Junior National Team alum finished with a 2.89 ERA, which was the third-best among American League pitchers who tossed at least 149 innings. His 3.9 WAR was also the best among Canadian big league hurlers.

After being selected by the Arizona Diamondbacks from the Baltimore Orioles in the Rule 5 draft last December then being traded to the Miami Marlins, Pop emerged as a reliable reliever in his first big league season. He finished second among Canuck big league pitchers with 50 appearances, and posted a 4.12 ERA, while striking out 51 batters in 54 2/3 innings. The Junior National Team alum had his strongest month with the Marlins in May when he recorded a 0.96 ERA in eight appearances, spanning 9 1/3 innings.

When Robson made his major league debut on August 12, he became the 13th Canadian to play in the big leagues in 2021. The Canuck outfielder got in four games and scored his first big league run with the Tigers, before he was sent back to triple-A Toledo. Between double-A and triple-A this season, Robson batted .295 with a .417 OBP with seven home runs and 19 stolen bases in 96 games. Robson was also a standout for the Canadian national team in the late spring at the Americas Olympic Qualifier in Florida, going 8-for-19 (.421 batting average).

In his final professional season, Romak, who won the 2020 Tip O’Neill Award, belted 20 home runs and had 52 RBIs in 107 games for the SSG Landers of the Korean Baseball Organization (KBO). He also walked 59 times, scored 55 runs and posted a .340 on-base percentage. In each of his five seasons in the KBO, Romak belted at least 20 home runs and finished with 155 in total in the circuit, which is the third-most by a foreign player.

In a Blue Jays’ bullpen that struggled for much of the season, Romano was consistently outstanding. The Canuck righty finished with a 7-1 record and a 2.14 ERA, while striking out 85 batters in 63 innings in 62 appearances. His 23 saves tied him with Claude Raymond (St. Jean, Que.) for most saves in a season by a Canadian for a Canadian major league team. Romano was particularly superb down the stretch. In 13 appearances in September and October, the collective slash line of hitters against him was .104/.204/.229. For his efforts, he was named a finalist for the All-MLB team.

After hitting six home runs in 35 games with the Astros to begin the season, Toro was dealt to the Seattle Mariners on July 27. The change of scenery was good for him. He hit a pinch-hit, two-run home run in his first at bat with his new club and became the M’s regular second baseman for the season’s final two months. Toro was particularly effective in August when he batted .296 with a .377 on-base percentage in 28 games. In all, he played in 95 games and batted .239 with 11 home runs and 46 RBIs and finished with a 1.7 WAR.

Votto belted his 36th home run on the final day of the 2021 season. With that, at the age of 38, the Cincinnati Reds first baseman finished just one home run shy of his career-high that he established 11 years earlier. From July 24 to July 30, Votto clubbed a home run in seven consecutive games to set both a Canadian record and a Reds’ franchise mark. For his efforts, he was named the National League Player of the Month for July. Votto also finished fourth in the National League with a .563 slugging percentage and reached two significant milestones in 2021, becoming the second Canadian big leaguer (to Larry Walker) to record 300 home runs and 2,000 hits. Following the season, he was named a Silver Slugger Award finalist among National League first baseman and finished 16th in the NL MVP voting. He was also named the Reds’ Joe Nuxhall Good Guy Award winner and was the club’s Roberto Clemente Award nominee for his humanitarian and charitable efforts.

After being activated from the 60-day injured list on August 10 by the Chicago Cubs after being sidelined by an oblique injury since September 2020, Wick proceeded to post a 4.30 ERA in 22 relief appearances. The 28-year-old right-hander struck out 29 batters in 23 innings and picked up five saves.

Unfortunately, James Paxton (Ladner, B.C.) and Mike Soroka (Calgary, Alta.), the 2018 and 2019 Tip O’Neill Award winners respectively, were sidelined by injuries in 2021. Paxton pitched 1 1/3 innings in his sole start for the Mariners before undergoing Tommy John surgery, while Soroka missed the entire campaign after re-tearing his Achilles tendon.

Other players born in Canada appearing in the big leagues this season were left-hander Andrew Albers (North Battleford, Sask.) who made five appearances for the Minnesota Twins and right-hander John Axford (Port Dover, Ont.) who made one appearance for the Milwaukee Brewers before suffering an elbow injury.

Also, after posting a 6-4 record with a 2.31 ERA in 20 appearances (19 starts) and striking out 142 batters in 97 1/3 innings between High-A and double-A, right-hander Matt Brash (Kingston, Ont.) was called up by the Mariners at the end of the season, but did not get into a big league game.

The Hall’s Tip O’Neill Award is named after Woodstock, Ont., native James “Tip” O’Neill who was one of Major League Baseball’s first legitimate stars. With the American Association’s St. Louis Browns in 1887, O’Neill set big league records in hits, doubles, slugging percentage and total bases, while compiling a major league record .492 batting average. Walks were counted as hits in 1887, but if O’Neill’s average was calculated by today’s standards, it would be .435, the second-highest in big league history to Hugh Duffy who hit .440 in 1894.